Once more, at the River John Library. Remind me to borrow a book from here, sometime.

I shouldn't tease. This is a really nice library. A good size, well appointed. Current newspapers and magazines. When my mother visited here in 2010, months after Dad died, Patricia brought her here one evening when she had to attend a book club meeting, which was held in one of the meeting rooms here. Mom had a gay old time. The librarian kept bringing her magazines to read. I wish I could have been here to see it.

The River John library has the distinction of being the first building in this and surrounding communities to have fibre op internet. Only installed in the last week or so. It is very fast, now that it is up and running. I daresay that people living here will now clamour to have fibre op installed throughout the community. It is apparently an expensive and time consuming thing to do, though. It took Buddy a full 6 hours to install the connections here at the library. It was not that complex a task, but it just took a while. The man who installed it in my home last year took about 3 hours to do his work, and he was not idle at any time, nor was he sweating his spheres off either. It just takes a few hours to do a typical install, is all.

After we leave here, we will drive to nearby Brule. The Mennonite community has a really good bakery, and we will partake its wares. After the fiasco which was last night's lobster supper, it can only be an improvement. We went to the usual place, the Salt Water Cafe in the town of Pictou. There was no lobster tank from which to choose the lobster you wanted to devour. They said they didn't have any in "at that moment", so we left and went across the street to the place that claims to specialize in lobster. A 1lb lobster, called a canner, was $30. We reluctantly ordered one each.

The name of the place? The Lobster Bar Restaurant in the town of Pictou.

The food arrived on the kind of tray you get food on if you are in prison. I'm not kidding. Metal tray with areas cut out to hold the various parts of your meal. The lobster had previously been frozen. You can just tell these things. If there was any garlic in the garlic mashed potatoes, it moved out in disgust and I have it on good authority that it is about to sue the people who put it there for defamation of character. There was a dinner roll. Some previously frozen carrots. Slaw? Well, it was there. The best I can hope  for when eating cole slaw is that it is edible. This wasn't. End of story. 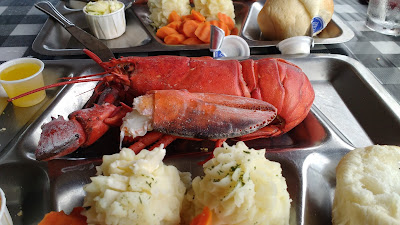 With taxes and tip, I paid nearly $100 for that meal. A horrible waste of money. We look forward to having an actual lobster supper soon, probably in Halifax.

We will have seafood for dinner tonight, too. We have a slab of Atlantic salmon in the fridge and I will barbecue it. Without bragging, I know it will be better than the crap we had for dinner on Thursday.

Sometime on Saturday we will load up the car and head back to the city. We want one day off to charge our batteries and wash our underwear before we return to the place that pays our salaries, on Monday.

I'm not sure if I miss the city or not. We have nearly all the things we need at the cottage. An internet connection would be nice there, but the local providers do not nicely accommodate cottagers, expecting  you to sign up for many months when you will only be there for a few.

You guys have a good day. I will bark at ya tomorrow.