Sorry I didn't write on Friday. We had an abrupt change of plans.

Well, maybe not so abrupt.

We decided Friday morning not to go to the cottage this weekend. Instead, we did a Valley trip, and only returned this evening. While down there we went to some wineries and spent some time at the Port Williams distillery.

When I was growing up in Port Williams, many years ago, I never thought, in my life time, that there would be a pub there, a brewery there, a distillery there. Well, there are two breweries there now, across the parking lot from each other, plus the distillery. Blows me away, when I think of it.

From the distillery, we drove the short distance to the Planter's Ridge winery on Church Street. It is rapidly becoming our fave winery down there. Glorious views of farmland along with products other than actual wine. They sell a mead that makes me want to cry, it tastes so good. If you want, they can serve you a glass of wine or mead along with a charcuterie board, which is what we did today.

We got to the Bevboy family home, dropped off our stuff, and drove to nearby Canning. I had promised to take Patricia to the new diner in town, a gluten-free place called Crystany's Brasserie.

We walked in, expecting a greasy spoon place. Were we wrong. We were given the option of eating upstairs. "Upstairs!, I said". Had no idea there was an upstairs. 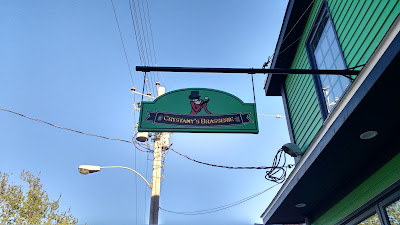 The interior is beautiful. The co-owner is an interior designer, and it shows in the tasteful appointments.

I have to back up for a moment. The location where the Brasserie is was where there was a diner years and years ago. I was reminded of the name, "The Light Lunch". I believe there was a fire there in the 1970's, and it was allowed to rot away to the point where, when they took over the space, the original location was razed, and then the new building, occupying the same footings, took its place. If they kept anything from the old location, I would like to know what it was. Maybe they found a loose nail amidst the rubble and incorporated it into the new structure some how.

We decided to sit upstairs by the window that overlooks Canning's main street. I ordered the chicken and wild mushroom linguine. Patricia had the salmon. The food was excellent. The sauce complemented the pasta in a way that is hard to describe, but it was beautiful. Patricia's salmon melted in her mouth. If it hadn't been unseemly, we would have licked the plates. We ended up sharing the blueberry shortcake. She had tea. I stuck with water.

Total dinner bill, with gratuity, came to 60 dollars. We have had dinners at Swiss Chalet that cost as much, or more, and which we liked far less.

We waddled to the car and drove to Coldbrook. We ended up at Guy's Frenchy's before returning to the house. Netflix kept us occupied until we turned in.

This morning we decided to return to Canning for breakfast. The first Saturday in a given month is when the local Baptist church hosts a brekky. Free will offering. We each chipped in 5 dollars. Eggs plus toast and beans and a pancake and bacon and sausage. Coffee or tea. Juice if you want it. Best deal in town.

We checked out a yard sale in Canard before going to New Minas and visiting the new Value Village store. I got some interesting books, like I don't have enough already. Patricia got some stuff. Wolfville beckoned. We went to the Farmers' Market and Just Us! and the Box of Delights and the Rainbow's End books before we returned to the car and then to the house, where we watched the last few episodes of The Riches on Netflix. Loved the show. What a damned shame it was canceled after that second season.

We locked up the place and then went back to Planter's Ridge, had that charcuterie board I mentioned earlier, and drove back to the city.

Tonight, I had a shower and am nice and clean and ready for my day tomorrow. Something neat will happen.

Something else happened tonight. The father of a missing person contacted me. I had been trying to contact this man for some time. No dice. Then, he writes me and says he would "love" to talk to me about his missing loved one. Will try to do that next weekend. It is a very perplexing case that has had quite a bit of ink over the years. I look forward to exploring this story further.

I think I will turn in. A very long day.