A four day weekend is behind us. I can say that we had much more fun this long weekend than we have in quite a few years. Lots of running the roads.

Sunday, we went to the home of Patti Shea's parents. Patti is one of the 4.7, and I have a picture of her holding a sign asking... oh, to hell with it. Here is the picture. 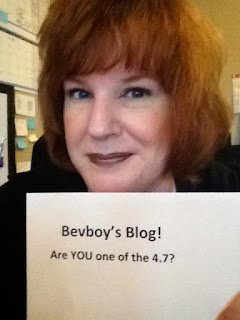 Anyway, she became an early reader of the blog, and I am still not sure why. At one point, I mailed her some blog business cards, but she misplaced them in a move, so I gave her a fresh one yesterday.

We had a great time at the party. My editor at Frank, and his wife, were there, along with many other people I only met yesterday. We all share some laughs. Patricia had a nice glass of wine.

We left around 4:30 and walked through the Public Gardens for a spell before leaving and walking up Spring Garden Road, before we decided to grab some dinner at Mexicali Rosa's. Hadn't eaten there in years and years, long before they moved to their present location, which I still think of as the Thirsty Duck location.

We had a decent meal. I had the chicken chimichanga. If there was any chicken in that chimichanga, it ran through it out the door, down the street and took the closest cab, in an effort to save its miserable life. Patricia's chicken burrito was also sans fowl. We both enjoyed, however, the rice and refried beans. The appetizer chips with salsa was terrific, though.

For dessert we had fried ice cream. That was nice.

Dinner came to about 50 bucks, including tip.

We will not be running back there.

We wandered our way back to the car, which we had parked on Summer Street, cutting through the Public Gardens again. We encountered an injured pigeon. It seemed to have at least a broken wing, maybe even a broken back. After a few minutes of writhing around, it died in front of us. Meanwhile, a murder of crows caw'd repeatedly above us. I can only imagine what happened to that bird's carcass after we left.

We got home. Watched some stuff on  Netflix. And turned in comparatively early.

Today has been about sleeping in and doing some stuff around the house. The coffee table we threw out on Sunday is not missed in the least.

So, it's nearly 9:30. Back to reality on Tuesday. Another long weekend in the history books. Where do they do, anyway?