I have spent the last hour or so researching and writing questions for my interview with the father and son of the missing person I'll be interviewing tomorrow morning. A very sad story.

This story has had quite a bit of coverage over the years. My challenge will be to try to cover material that hasn't been covered before. I will do my best.

When we finish, we will likely return to the city right away. There is some kind of Italian festival in Halifax over the weekend.

My eyes just alighted on a book on the bookshelf next to me. Here is a picture of it: 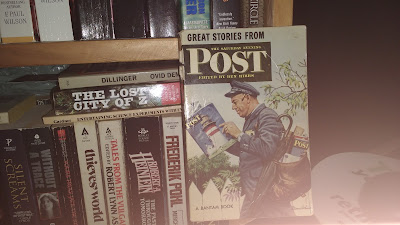 I know it looks a little washed out. Sorry. It's the flash from my camera.

I have an awful lot of books. I don't know if I can let them go. Maybe some of them. But so many have sentimental value to me. This is but one of them.

In my home town of Port Williams, for many years, there was a convenience store. It went through many owners over the years, but one consistency was that, in the corner, as you walked in, there was a bookcase, full of books donated by some charity to raise money for that charity. Every book was 25 cents apiece.

Over the years, I picked up... my frig, a couple hundred books, mostly paperbacks, and mostly vintage things. Books that were very long since out of print. Books I had never heard of before by authors with whom I was unfamiliar. I mean, I had heard of John D. MacDonald and his Travis McGee series, but I had no idea he had written dozens of other, non-series novels. Most of those books, I picked up from that bookshelf, a few at a time, over the course of years, whenever the gods who deposited the desired books, did so.

One day, and it must have been quite a while ago because it was before I would write the date and location of purchase of every book I acquired, I picked up the above book. I am nearly positive that I got it from that bookshelf.

I had, of course, heard of the Saturday Evening Post. I knew they published fiction. I did not know it had been fiction that some might consider to be "significant". I just knew that the cover intrigued me. And it was only 25 cents. (I later learned that there was a second cover to that book, which intrigued me less!)

There is not much more to this story. I have had this book all these years. From time to time, I misplace it, and then it turns up again. I have never read any of the stories in it, but the descriptions on the back cover, below, still interest me enough to want to read them, if that makes any sense. 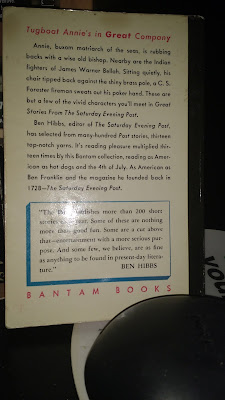 Here is the inside front page: 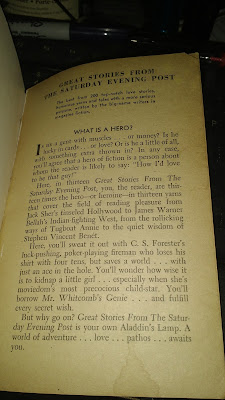 Now, who woudn't want to sit down and peruse a story or two or three? Why haven't I read this book a dozen times?

I don't know. I wish I had an answer.

Helluva a cover, though, isn't it? And, it did provide part of a blog post, too, so there is that.

I have a long day tomorrow. Think I will turn in.