We returned to the city late this afternoon. We saw our friend this morning around 10. it was good to see her again. We don't see her nearly enough.

Today was Open Farm Day in Nova Scotia, New Brunswick and PEI. We drove down the street to Tap Root Farms and wandered around the place for 30 minutes or so. We drove to Willowbank Farms at Starr's Point. Too many cars to bother parking and walking around, so instead I decided to show Patricia the Starr's Point Cemetery, which is down a rutted dirt road past the farm.

I don't think I had ever been there in my life. We wandered around the small, immaculate cemetery. I founded Harold Legge's headstone. Legge was head of Legge Trucking. If you are from NS, and are of a certain age, you likely saw Legge Transport Mac trucks around. He was like Nova Scotia's Donald Trump in the sense that he wanted people to know it was HIS company, dammit. Which makes sense, because the company pretty much died with him in 1993. There was a sordid aspect to the disposition of his estate, which is summarized here.

Harold Legge was a friend of the family. When my former sister got married in 1987, he lent her and her new hubby the use of his limo. Dad always spoke highly of Harold Legge, who was a flawed man, but never did anything to me, so I have nothing bad to say about him.

We saw more headstones, including plenty for the Starr family. People think that Starr's Point is named because of the twisty 90 degree turns. Nope. The Starr family lived there for a very long time, and it just so happened they moved to an area whose shape from the area might look like a star. It would be like me moving to "Beautiful Hair" Ville and people thinking I had moved there because I had beautiful hair. Then, they named the community beautifulhairville after me.  Weird, I know. Parse it and get back to me.

Anyway, we saw the following headstone: 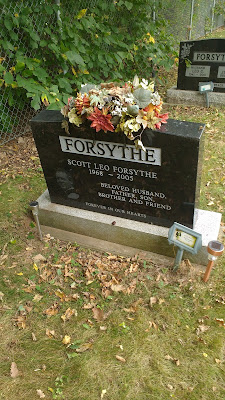 I did not know Scott Leo Forsythe at all. I was just intrigued by the picture of him that was somehow etched into the headstone. I did not know that was a thing.  Here is his obituary. How sad that such a young and vital man should die so young. Effing leukemia, man.

We continued on our way. Along the extreme West end, close to the fence that abuts the cemetery from a farmer's field, we saw the following, and I was floored. 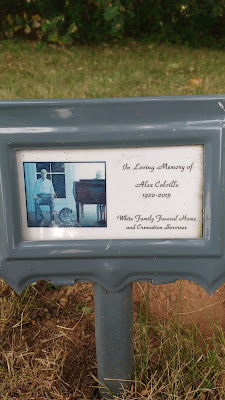 Yeah, Alex Colville is buried here. And there is no headstone.

Alex Colville is to Canadian art as... some really talented guy is to American art. Here is his obituary, with a further link to the webcast for his funeral, which I have not seen. Colville is a luminary in Canadian art, and was from World War II until his death in 2013. When I was at Acadia University in the 1980's, and he was its Chancellor, the covers for each year's academic calendar were all Colville paintings.

His website is still up. Check it out, won't you?

When he died, I see that the CBC reported he would be buried in Starr's Point, but I have no idea why. When I think of Colville, I think of Wolfville, of Acadia, and I think of that huge cemetery in Wolfville that could easily accommodate him. I wonder why he decided to be buried there, in this relatively obscure, small cemetery.

And... even though he was cremated, why do he and his wife not have a headstone? What you see in the above picture is all there is to indicate that Alex Colville cremains are buried there. Why? The family had money. As I stated, he was a giant in Canadian art, and I find it difficult to believe that he would not want a suitable headstone, or that the people who liked and respected him, would want this situation to remain.  It is very puzzling.

We ended up driving to Wolfville and had lunch at the Front street Cafe, which we learned has been bought out and will close shortly for "renovations". When it reopens in a few weeks, it will have a new menu and perhaps a new focus. The new owners have purchased the rights to the business name, so it may yet be called The Front Street Cafe. But I will bet you $ that the prices will go up. I had a two piece fish and chips for $10.75. A roast beef dinner was $11.99 I think. Hamburger steak with veggies and mashed potatoes they make right there was $10. Nothing lasts forever, dude.

We returned to the family estate, loaded up the car with our stuff, and returned to the city. We watched the last part of "Driver" on Netflix. a British crime drama starring David Morrissey. We had to turn on the subtitles to make out what the hell everyone was saying. Working class British English is nearly impenetrable to me.

It has been a fun weekend. We have 3 days of work before we are off for 5 more days, a mini vacation in Wolfville for the Deep Roots Music Festival. We are looking forward to that, very much.

I think I will turn in. The nap I had earlier this evening will keep me up for a while yet, but perhaps I can read for a while or something.