We are back from the Friday night Deep Roots show at Festival Theater in Wolfville, pronounced "Wuffle" by the locals.


It was a real mixed bag of talent tonight, folks. Patricia was interested in toe tapping times, so she was a mite disappointed in Alex Kehler and Nicholas Williams. I liked them just fine, although their music had more of  a classical bent, featuring some instruments I had never seen or heard of before, so I am not sure it was a good fit for a music festival devoted to Roots or Folk genres. 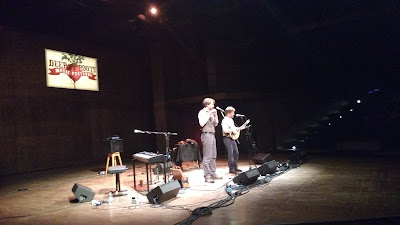 Susan Crowe and Cindy Church were good, despite themselves. The one on the right,  Ms. Crowe, made mistake after mistake, with Cindy and their guitar player doing their best to cover for her. At one point, Cindy Church looked at the guitar player in a "My God, what is happening?" kind of way.

Susan Crowe had a very difficult time tuning her instruments (guitars, mandolins), at one point becoming exasperated and exclaiming, "I'm 63. Give me a break, people!", thereby eliciting a laugh from the audience. She gave up at one point and muttered that her instrument was about as tuned as it was going to get and repeated a joke that banjo players spend half their time tuning their instruments and the other half playing them out of tune. Another time, she took the wrong cue and picked up the wrong instrument. And she announced the wrong song title, which was the title of a song they had played a short time before. Sad.

She sang well, though. I just hope that tonight's performance was an aberration for her, and not a sign of something more troubling. 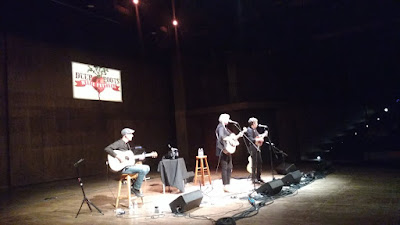 Kim Dunn played after the intermission.  His music was not to my taste. He has a nice voice, but the lounge act he put on wasn't something that grabbed me enough to care. 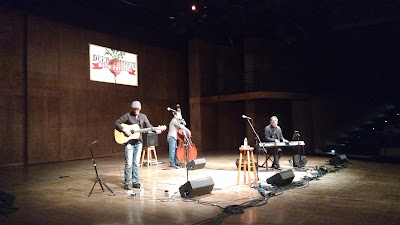 The show was hosted by Heather Rankin, and she was also the final performer this evening. She made it look so easy, effortlessly banging out some Rankin Family tunes, performing some original compositions from her first solo album (out since April), and also performing her cover of Tears for Fears' (an underrated 1980's band) "Everybody Wants To Rule The World".

In between she told funny stories about her travels, like the time she rented a hotel room a year ahead of when she needed it and settled for another hotel room, which she discovered at the last moment was inhabited by a naked man. The hotel, in an effort to placate her, offered her a free breakfast. She mused that if she had slept with the man, he likely would have provided her a free breakfast anyway, so she would not have been any further ahead.

And I will never forget her Los Angeles story, where she was renting an apartment, arriving around 4am, and being awakened 3 hours later by a distraught man banging on her door, yelling at her in Spanish about something. She told him sharply to leave. After he left, she opened the door to see what the problem was, and discovered the key to her room, still in the keyhole. 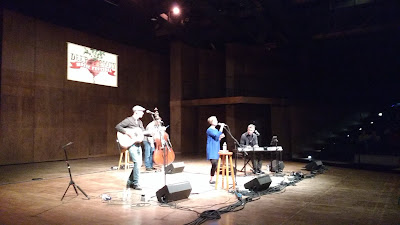 Heather Rankin was easily the highlight of the evening. Hands down.

The show over, we wandered to the drugstore, discovered that both of them were closed, and made our way back to the car. We had noticed a fellow hanging out by one of the stores. He had a dog and some bedding in the doorway of another store. On the way back to the car, he was joined by his girlfriend. They were going to hunker down for the night, with their shelter being the recessed doorway and what blankets and pillows they had.

Homelessness in the Valley has always been hidden to me. People couch surfing or finding some kind of camp in the woods or something. I do not recall any time other than this evening when I saw the kind of homelessness that I see in the city all the time.

Does anybody who lives in the Valley want to comment on that homeless couple? Is this an exception, or is this becoming a real problem in these here parts?

On that sad note, I think I will turn in. Lots and lots of Deep Roots stuff on Saturday, and I need my beauty sleep!