Now, where we were?

We went to the Sunday morning show, a tribute to Ron Hynes, who wrote many songs over many years, but is likely best known for writing "Sonny's Dream". Japanese people have recorded this Newfoundland composer's songs. Maybe wherever you are, you have heard this song and thought it was done by some dude who lived in your area. Unless your area was Newfoundland, it wasn't.

Hynes died a couple of years ago. He was described as "complicated" and many of the stories told by those who knew him yesterday pay testament to those complications. Except those told by Matthew Barber, who I am not sure even met the man. Not sure what he was doing there. 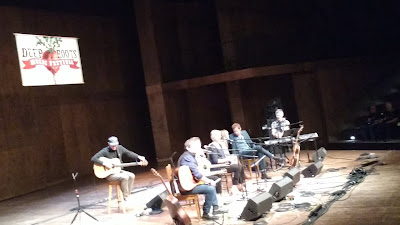 They told some funny stories. Lennie spoke about how, early one morning, after he had been out playing until very late, he got a knock on the door of his hotel room from a couple of census takers. He explained to the women that he was tired and that this was not a good time. They persisted, and he relented. He told them his name and that he was a singer/songwriter. One of the young women squealed in delight and said to the other, "My god. Lennie Gallant! He does that song, 'Sonny lives on a farm, in the wide open space'" Which, of course, is the opening line to "Sonny's Dream" by... Ron Hynes. Apparently Ron Hynes got a big kick out of that story, every time he heard it.

Kim Dunn spoke about playing in a cover band that eventually made its way to Newfoundland, where he felt obliged to play Ron Hynes' music. "I know Ron's middle name", one man yelled, "And I want to hear Ron Effing Hynes songs!" So that's what Kim played.

They took turns talking about this man and performing his songs, until the end, when they took turns singing verses to "Sonny's Dream". That's when Matthew Barber messed up. His sister held the lyrics sheet for him, and he stumbled over the words, singing them with all the enthusiasm of a man shopping for shoes.

The show was over around 11:15. We knocked around Wolfville for 45 minutes or so, returning early to so we could queue up for the grand finale at 1pm.

Sahara and Kamila, with their Indian-laced influences, kick off the show. I liked it, which is more than I thought I would say. 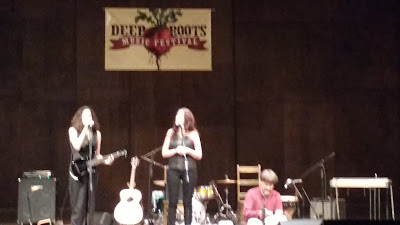 Port Cities rocked the house. I love these guys. I can't wait for their first album to come out. They have tee shirts though. 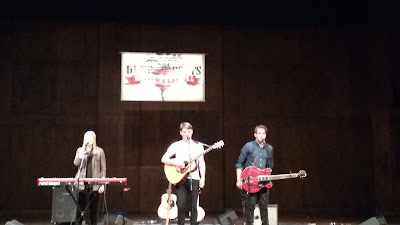 The Basin Brothers had a unique approach. Bluesy, twangy Country one moment. Hard rocking blues the next. And the neatest thing was, from time to time, the lead singer and the drummer would switch places. 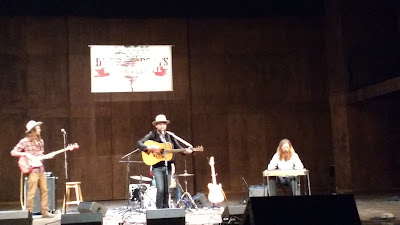 Every year, Deep Roots give out a Valley Arts Award. This year's recipient was fiddle maven Keith Ross, who used to own Ross Music in New Minas. 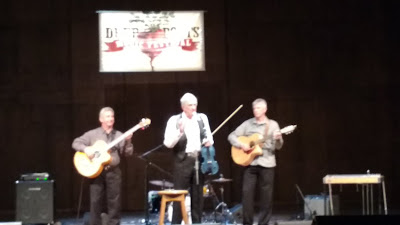 Here's Scott Cook. I mentioned him in my previous post. 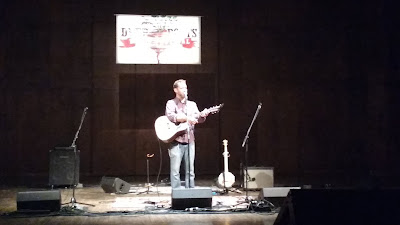 Finally, we had Ida Red. We left before they were finished. Not really our cuppa. During their performance, little kids dressed up as fairies and gnomes or whatever, all ran out on stage. That is definitely not our cuppa. 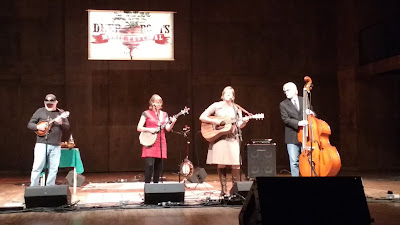 And here is my friend Darrin Harvey, who hosted the Sunday shows. Patricia likes him. She hugged him with both arms. Should I be jealous? She doesn't hug me with any! 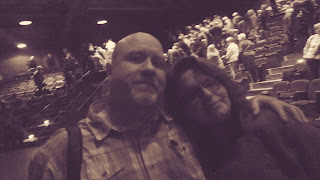 So, another Deep Roots festival is over and we were a little... underwhelmed. A titch disappointed. Maybe it's our fault. We didn't drive to Berwick to see the performance there the other night. We didn't go to the Old Orchard Inn either Friday or Saturday to see the blues shows, so we didn't see Teresa Malenfant and Katey Day. We didn't hang around for the late night performances in Wolfville proper, so there is a good chance we missed something that would have changed our perception to a more positive one.

Hillsburns and Port Cities were revelations. Loved them. Heather Rankin made it look so easy. Susan Crowe improved on Saturday and Sunday after a poor performance on Friday night. Lennie Gallant is Lennie Gallant. So, alas, is Matthew Barber. Cindy Church has the voice of an angel. The Classified/David Myles concert was sublime. I will never forget the sight of 80 year old's singing along to Inner Ninja.

The festival is called Deep Roots, so I expect more Blues. I expect roots music, which is hard to define I know, but Ida Red is not it. I wish they had had performers like Jonathan Byrd and Sylvia Tyson and Thom Swift and J.P. Cormier again this year.

I get that you have to have variety at these festivals, but I think they went too far the other way this year.

And... while we are at it, why don't weekend passes get you into absolutely every venue. The Old O shows cost extra. I think the one at the Union Street Cafe in Berwick did, too. I'd be happy to pay a few extra dollars if it could mean being able to attend all the shows, period, full stop.