I have been out of town for the last few days. Let me tell you about my many adventures.

First of all, my editor at Frank has kept me busy. A few weeks ago, he asked me to cover the sentencing hearing of Amy Hood in the town of Pictou. Amy was a bad girl. She is a former elementary school teacher who was fired from that position after it was learned that she had orally copulated two of her former male students, who were teenagers.

Frank has written at length about Amy over the last couple of years. My editor did not want to miss the sentencing hearing for the world, but that hearing was on the 13th, which being a Thursday on a deadline week, meant that this was difficult. All articles for a given issue of Frank must be written and edited and assembled by that day.

He gave me lots of advice and help. The first thing was to get me an actual press pass with my name on it. Here it is: 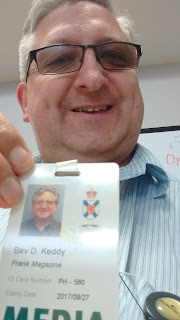 I was to be at the Pictou Court House in plenty of time for the 9:30 hearing start. I did not have to stand with the rest of the media, which is why when the CBC's Blair Rhodes shot some pictures of Amy walking into court, he got me in the background. 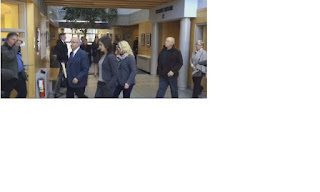 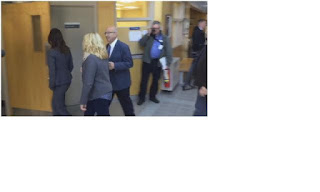 My only experience with a court room trial was from watching television dramas, all US-based. I kept expecting objections, and for the judge to say "sustained" or "over ruled". Never happened. The Crown attorney and the defence attorneys all sit at one long table. The accused sits behind the defence, and the media behind her (I was told to sit on the left, behind the Crown, and did so, because it was a Sheriff telling me to do that, so the rest of the media were separated from me.)

I took plenty of notes. Plenty. Six and a half pages. I also recorded audio files in court. As long as they are not broadcast, used for the purposes of producing an article, then that is allowed. Other media were live tweeting. My editor told me that it would not be possible to take too many pictures. I could literally take 100 pictures, that they might only use 8, but they would be good pictures. My camera has a rapid shooting mode, so I ended up taking 369 pictures during the course of the morning.

The full details will be in the issue of Frank that goes online on Monday. My editor wrote the article using the audio files I recorded, which I uploaded to dropbox and which he downloaded, plus the pictures I used. I am hoping he was able to get a few good pictures out of all the ones I shot.

The hearing finished around noon time. You can read about what happened online, or in Frank on Monday.

The Crown attorney agreed to a scrum, so I got myself next to him and stuck my voice recorder toward him, and took pictures as well. That night, on the CTV supper time news, I saw my left shoulder and left arm holding my voice recorder, during Kelland's piece about the trial.

The defence attorney, Joel Pink, took one look at me, knowing that I was reporting for Frank Magazine, and declined a full scrum, but I did see him speaking individually with CTV's Kelland Sundahl and the CBC's Blair Rhodes. When I attempted to join this mini scrum with Blair, Pink just glared at me and walked off. I looked back at him and he affixed me with a look that told me that I was not going to be invited to his home for a holiday party any time soon.

Why was he this way with me? Read the new Frank out Monday, and you will see why.

After court was out, I grabbed my laptop from the car and got myself over to the Indigo Cafe and whatever the hell it's called on Water Street in Pictou, just up the street from the court house. I called my editor. I copied the audio files to the hard drive and zipped them, before uploading them to  Dropbox, after which I shared that zip file with him. This saved a lot of time over emailing the files to him, taking into account gmail's file size restrictions.

The pictures took up over 400 megabytes once I had zipped them up. Uploading those to dropbox via the internet connection at the coffee shop would take forever, so I opted to drive to the River John Library, 30 minutes away, to use their fibre op connection. I did that, but when I uploaded it still took another 25 minutes, so my editor didn't get the resultant zip file until after 3pm. He would likely have been well to work on the article by then, anyway, and could just sift through the hundreds of images and select the few he wanted for the piece.

My day started early, and was over by 3:30 or so. I grabbed some dinner for us at the Chinese food place in River John. I have no idea what keeps that joint in business, other than the fact that it is the only restaurant in town. The wonton soup was pretty good, but the chicken and broccoli tasted like snot, and the beef egg foo yung had about as much beef in it as a pig does. I paid very good money for that food. Never again. The place is vile.

I was zonked after my day's labours. All that running around. All the photo taking. All the audio. The phone calls. The dropbox experiment. But it was exhilarating. I felt so alive running around like that. My editor told me to "enjoy myself", and I wondered how that would be possible. Now, looking back, I did enjoy myself.  I had a ball.

As far as I know, this was a one off experience for me. Never to happen again. So I want to thank my editor for giving me this opportunity. It was a blast!!

You guys have a good day.

Talk to you soon.