I just sent off my most recent media column in to my editor at Frank. For reasons I may not discuss, I was in a crabby mood tonight, and that mood likely informed my writing. I had begun writing it Tuesday night. I added some stuff tonight, and revised the entire thing just now. All while crabby. I hope my editor keeps some of the crabbiness in my column. Crabbiness can be a good thing.

The mood I was in, it took me nearly a full 3 hours to write what I did tonight, which is longer than normal. I will try to calm down and take it easy. Calm. Blue. Ocean.

Newbie has been running around the home office tonight, looking up at me with those come hither eyes of his. How can I resist his feline charms? Soon, my pet. Soon.

I was crabby when I wrote that column, but I managed to combat it in the last few minutes. I hid the posts of one of those who caused me such aggravation today. That felt really good. I think the next step will be to stop following the little worm. And, just for good measure, maybe I will unfriend him entirely.

I can take a lot of feces from a lot of of people over a lot of things. I have no problem with people disagreeing with me. I often share memes and jokes on my Facebook, some of which I do not agree with, often to provoke discussion. But the meme I shared today, shared by many other people, caused such grief and vituperation that I wonder where it came from. Here it is: 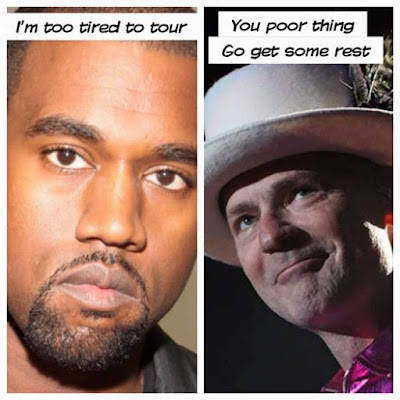 That is Kanye West on the left, and Gord Downie of Tragically Hip on the right. West was complainng about being tired and was dropping out of his tour. Gord Downie has brain cancer and managed to marshal his energies this summer for one last Hip tour. This month, and maybe next, he is touring small venues in support of a solo album. You may recall that tix to the Halifax concert sold out in minutes. Because that concert is for a charity, scalpers trying to resell those tickets on Kijiji and other places have been banned.

More than a few people on my Facebook thought I was making fun of those who have mental illnesses, as Kanye may have. He has been a so-and-so for many years. Now, apparently, he is a mentally ill so-and-so, and we should feel sorry for him, even though he is a so-and-so. Don't criticize him. It's not his fault. Other people have shared this meme, and I am the one who catches flak for it.

All afternoon, and into the evening, I have been the subject of much vituperation. One dude carried the conversation over to his own Facebook timeline, not mentioning me by name, which would be like tagging me, but going on and on about how this is the close to the most offensive meme in the history of memes, how it (and I) mocked those with mental illnesses, blah blah blah et cetera.

It didn't matter that at least two people on the long thread have mental illnesses, and supported me.

Another person wrote that we should all be nicer to each other. I guess that means that one should never criticize anybody for any reason whatsoever, because that person may have a mental illness and it's not his fault. Does that even make any sense?

It's fine to disagree with me. Fine to challenge me. But the level of hatred I saw today leveled at me was beyond the pale. I don't need this. And I don't need those who did this to me.