Friday night, after we returned from Otis & Clementine's in Tantallon, and after we had washed some towels and whatnot, I decided to drive down to the Valley, and stay over night. I bought a few things at the Sobeys in New Minas, got some cash for the nice man who plows the drive way down there, and dried said towels. A new dryer for Casa Bevboy is at the top of our wish list in 2017!

I had two lots of these towels to dry. I went to bed while the first set was drying. When I woke up around 12:30am, I pulled the now-dry ones out of the dryer, put them aside, and placed the remaining wet ones in the dryer, set the timer, and returned to bed. By the time I got up on Saturday morning, those were nice and dry, too.

I had some errands to run. I went out to visit my parents' graves. I noted that they had finally put a year of death next to her name. About time. And someone, likely one of my adoring sisters, had put a wreath around their headstone. I wish I had done the same.

I walked around the cemetery for 20 minutes or so, looking at the headstones for families I knew. One was for a woman who died some 3 years ago, but her grave is festooned with fake flowers and little toys and devices that made me think that she must have loved that stuff when she was alive.

I drove into Kentville. Went to RD Chisholm's Ltd. Bookstore, because that is what a person should do when he is in Kentville. I regarded the building across the street from where I parked. I saw a picture on Facebook the other week of that intersection. Webster Street once ended there; and this building has been built up and changed but remains recognizable from that period in the late 1800's. So is the place across the street, where Paddy's Pub is now. I recall in the late 1970's when that was a record store that also sold comic books. It has changed hands many, many times over the last 140 years or so. But I had no idea that other place, which I think is on the market now but which I mostly recall as the MacDonald Chisholm Insurance building, was so old.

Anyway, at the bookstore,  I got a book about a cat that ran away from home but was found just in time for Christmas, for Patricia. I walked to the dollar store and got a couple cards that hold gift cards. Only a dollar each. I refuse to pay more than a dollar or so for a bloody greeting card.

I returned to the card, and drove to the house of the man who plows out the driveway. I paid him and gave him his greeting card and bade him open it. He was delighted to see the NSLC gift card in it. I thanked him again for all his hard work and returned to the house to fetch a milk bottle. I retraced my steps to the Fox Hill Cheese House. Got some of the crazy expensive egg nog there for six dollars. It would have been nine dollars if not for the deposit on the milk bottle. I also got a gift pack of cheese.

Growing up, I had no idea there would be a cheese house, a winery, a commercial farm, a short distance from where I grew up. In a couple more years, there will be at least one more winery on that street, and maybe two.

I drove to Canning and got something for my lunch at the convenience store that people keep going on about. Sammich and a slice of pizza. Both were terrible, inedible things. I threw the remnants on the front lawn. I doubt if the crows have touched it by now.

I loaded up the car with the towels and my other things. Took pictures of the Ruth Rendell novels I own to compare with the ones Otis & Clementine's has so I can get the missing ones. Locked up the house and drove to Wolfville. I got Patricia a gift card for Just Us! Coffee in Wolfville and drove back to the city.

I am always bushed when I return from the Valley. This was no exception. I unloaded the car and plopped myself down on my recliner around 2:45. I slept a few hours.

We had a quiet Christmas Eve.

Christmas Day was quiet, too. We agreed not to buy each other very much, because our main gift was the 2016 Kia Soul in the driveway. But I gave her that book, plus a few others, along the gift card and a drying rack. One or two other things. She got me a gift card for Otis & Clementine's. Socks. Salsa. A few other things.

We watched some shows on Netflix and Plex. Rested. And, two days later, we return to work in the morning.

One other thing. Regardez this book: 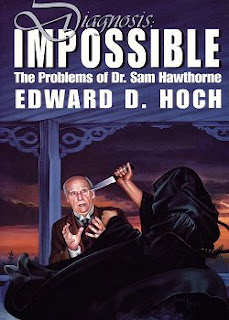 I bought this book years ago, but misplaced it years ago. Last year a nice man in Dartmouth gave me a crap ton of mystery magazines and related books. Three of them were by Edward D. Hoch, in which the author collected tales of some of his many series characters Ben Snow, Rand the retired spy, and the gypsy Michael Vlado. I tried to find the above book, to no avail.

This afternoon, I decided to tidy up the books in one section of my home office. I began to move the books blocking the bottom shelves of a book case. The bottom shelf became available to me again after a long time. I looked through the books. The right most book on that shelf said "Hoch" on the spine. I pulled it out, and there it was! Now I can put that book with the other three.

But, you know something? Those Hoch stories about Dr. Sam Hawthorne are all about so-called impossible crimes, locked room stories, people and things who seemingly vanish into thin air. It is ironic that this very book "vanished" from me for years, and that I should find it less than a metre from where the other three books are! Somewhere, Edward D. Hoch is chuckling. That, or he thinks I should organize my books better.

On that note, you have a good night, and I will bark at ya tomorrow.

What is your real name?

Why do you want to know?