As I mentioned last night, we made a whirlwind trip to the cottage yesterday.

We hadn't been to the cottage since the day I covered the Amy Hood trial for Frank back in the middle of October. We didn't stay the weekend because a friend of Patricia's was retiring the following day. Due to one thing and another, we didn't make it back to the cottage to shut the place down for the Winter.

When October became November we realized we really had to get to the cottage. When December rolled around, it became imperative. Since one of our impediments was the fact that our cars were old and maybe not up to the trip (the October trip really kicked Grand Prix's arse), and that impediment no longer exists now that we have the Soul, and since the weather has been taking a turn, we knew we could not put it off any longer.

We got up Saturday morning, had breakfast and left the house around 11, which is later than we should have left. I cashed my latest cheque from Frank Magazine, and then we drove the 2+ hours to the cottage. We had to take a pit stop to take a pee at the Sobeys in Pictou because the water is shut off at the cottage, so we didn't arrive there until shortly before 2pm.

We proceeded to do the things we should have done before: remove the batteries from the remotes, bring in the plastic chairs from the deck, along with the patio tables. We decided to store the barbecue inside the cottage, too, rather than drag the thing out to the shed. But, first, we detached the tank from the bbq, and that is living in the shed for the winter. I put some fuel stabilizer in the lawn tractor and started it up for about 10 minutes, before trying to remove the battery. I had to go back inside the cottage and find a wrench to remove the bolts with. The wrench is hanging on a nail in the shed now for when we need it in the Spring.

Patricia did most of this task: cleaning out the fridge.

I loaded up the car with 4 plastic shopping bins, a Kitchen Aid, the lawn tractor battery, a gas-powered whipper snipper, and the other Sirius radio, because the remote goes works fine with the original radio here in the house. The car was full up.

We were done by around 4:30, as it was getting dark. We had toyed around with the idea of staying overnight at the cottage, but the only water we had was what we had left in the fridge, the toilet was unusable because the water was turned off and the pipes drained, and the only food we had was stuff that went we stuff that we didn't have. Besides, Newbie was back in the city, waiting for us.

So, we drove back into the town of Pictou to get dinner at Sharon's Place. We can always get a good meal at that long-time diner. I connected my phone to the wifi there and learned more about the situation with the teachers that starts Monday. It sucks for literally everybody in the province. People are taking sides. And it is the kind of situation where people in the same house can have diametrically-opposed opinions on it. But I digress. 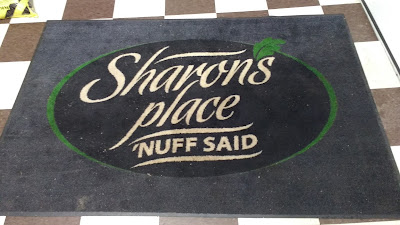 We finished our turkey dinners. We were in Pictou County, dammit, and we wanted to have a Pictou County pizza, with the unique brown sauce that is spicy and delish. Apparently, Sobeys stores in the province sell that pizza sauce, but we have never seen it. At any rate, we walked across the street to Crown Pizza, ordered a za with pepperoni, cheese, mushrooms and pineapple. Patricia is sniffing it here: 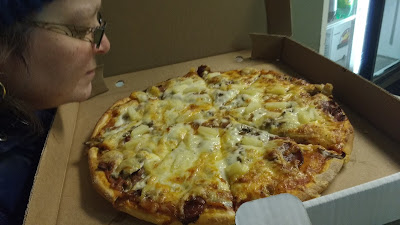 The pizza sat on her knee the whole way back to the city. It was piping hot most of the way. She didn't need to activate the heated seat feature!

One thing we have noticed about the car is that the gas tank must be significantly smaller than the one in the Grand Prix. We left Halifax with a full tank yesterday morning. By the time we got to the cottage, it was down nearly a half tank. Just to be on the safe side, I put 20 bucks in last night. When we got back in the drive way around 8:45 Saturday night, it was between half and three quarters of a tank. I don't think the car is especially hard on gas, so I am chalking it up to the size of the tank.

Anyway, when we got back last night, we were so tired we didn't unload the car until this afternoon. I wrote that short blog post before turning in and sleeping like a log for a large number of hours.

Today, I made breakfast and washed dishes and lugged that stuff from the car inside. I put most of it away. I didn't fritter away my day, but I didn't work on any of my Frank articles, either. I will be busy this week.

It is around 9:15. I am told that the pre-retirement course is grueling, so I think I will turn in early.

You have a good one. Talk at ya tomorrow.