I was off today, which is just as well, because it has been cold AF today. I gather that "AF" means "as frig". Maybe something stronger. Let's go with "as frig".

The highlight of the day was... well, see if you can figure it out on your own. 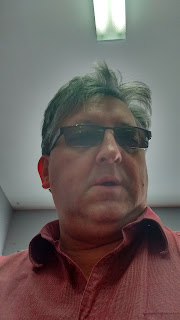 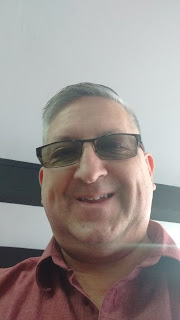 Now, what changed in about 30 minutes time? Well, I am smiling in the after picture, and a little owly before that. Maybe a clue?

I got my hair. It was just too long and unruly, and the style was not designed to grow as long as it had. I was using a ton of product to keep it in place. In the last 10 days or so, I had resorted to using product, combing it up and away from my forehead, which didn't work for me or anybody else.

I went back to Fine Lines in Lakeside. They were not even open when I got there. As I pulled up, a guy got out of his car and got in ahead of me, so he was served first. I had time to walk around the waiting area for a moment when my old friend Jaleel showed up. He had cut my hair six months ago, and knocked it out of the park. He did again, today. I like this young man very much.

Something happened, though, and they hadn't got their oil delivery yet, on what is easily the coldest day of 2016. They didn't need to put fake ice on the windows, because there was plenty of the real thing on the windows. No heat. They had a block heater thingy, but that kept nobody warm. When I shook Jaleel's hand after paying him, it was ice cold. I got to go home in a nice, warm car and back to a nice, warm house. He and his colleagues had to stay there all day.

In the afternoon, we went over to Dartmouth. Patricia had an appointment. I went into the Gateway Meat Market next door and picked out some steak for a nice breakfast later on this weekend. And, in the reduced section freezer, I saw some marked down haddock, which is our fave fish. It was frozen, but at a good price. Got just under 7 pounds for just a titch over 20 dollars. Two people saw the fish in the shopping cart and wanted to know where they could get some. I admitted I had it all, and they were disappointed. Everybody likes haddock. I felt so bad I offered to give a package of the fish to one gentleman, but he gently declined. We called each other a gentleman and went about our days. I am sure he will be back there soon and get his own packages of haddock.

We got some other stuff there before going to the Sobeys in Clayton Park. Got a Pictou County Pizza for dinner. They do what they can to replicate the experience of an actual Pictou County pizza, with the spicy brown sauce and actual pepperoni. Turned out to be pretty good, actually. Got a bunch of other stuff there, too. Then we went to Costco in Bayer's Lake. I kept the car running. Then we went to the Bulk Barn before returning home. I cooked the pizza.

We spent the night watching stuff on the PVR. Saw the mid-season finale of Designated Survivor. I look forward to its return after the holidays.

Been a long day. Party at a work friend of Patricia's tomorrow. Think I will turn in.

My first episode of 'DS' was last week's and I feel like I'll have to catch up; so much show in so little time!

Have you checked the 'flipp' app? Basically a Canadian way to coupon at Walmart. Catch you next week! -Nick @ MetroDeli