Sorry I didn't write on Saturday. I was up doing stuff and then we stayed up quite late watching movies on Netflix.

We watched the first Mission:Impossible movie and then the most recent one, made 19 years later. I didn't really notice that Tom Cruise is not a young man until we watched the second Jack Reacher movie last year, but there has been this creeping-age thing going on with him for several years now. He looks much older in the most recent Mission:Impossible movie, which came out in 2015. We have not seen "The Mummy" yet, but I have read all about it. Apparently Tom Cruise insisted that his character be referred to as "young", even though he made it at age 54.

Anyway, today, Patricia went on a course to build a potting bench at Hands on Halifax, where people pay money to build things they can turn around and use. They also provide a place where people can go and rent tools and build stuff. Pretty cool thing to be able to do right in the heart of the city, although my father had a very nice work shop in the house, and before that, he would work long into the night in the garage. She got to use a mitre saw for the first time. The bench would not fit in our car, so one of the instructors delivered it to us, which was good of them. Ten dollars in delivering costs was money well spent. 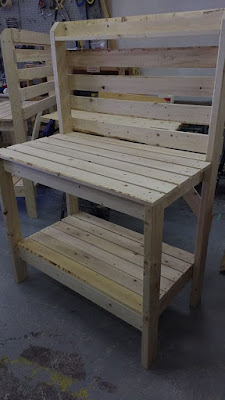 We dragged it to the back yard after dinner this evening. After work tomorrow we will get some sand paper and some verathane and some stain for it. Patricia can lovingly sand it down and then stain the thing while I stain the front deck.

We only have to work three days this week. We are off Thursday and Friday. Looking forward to this mini vacation.