I like these days. Just sitting around not doing much. Watched some television .Washed the dishes. Patricia made a wonderful chicken dinner with roasted Brussels sprouts, that I enjoyed more than the chicken. The chicken was awesome, of course.

We brought back a lot of food from the cottage yesterday. Stuff from the freezer, mostly. Several packages of chicken (some of it cooked today), some hamburger, more than a few packages of sausages we got for half price at Sobeys this Summer, some coffee, some other stuff. When we got back around 6:45 last night, I had lots of fun finding room for it all in the freezers. We now have enough food to last us for several months, as long as we are organized and take stuff out ahead of time to thaw so we can cook it.

I also grabbed a few books I was keeping at the cottage, and brought them back here. All my Michael Connelly Harry Bosch novels are under one roof now. I know you don't care, but I care, because I care about such things. You have to accept my quirks, people. We have been together for 10 years now! It will go so much easier for you if you just go along for the ride.

Last week, I went through my disorganized book collection and found what I think are all the other Connelly books in my collection. In doing so, I found quite a few other books I had misplaced. A particular favourite are the stories of Mr. Joe Gores, whose work I became familiar with in the pages of Ellery Queen's Mystery Magazine, and which I enjoyed very much. I soon learned that the man wrote novels, many of them featuring the repo-team of DKA, or Dan Kearney and Associates. Gores himself had spent many years working as a private investigator specializing in repo's. It was the San Francisco firm of David Kikkert & Associates, which he thinly disguised for his eventual series of novels and short stories.  It may sound boring, but these stories were anything but.

Here are a couple vintage covers from these vintage novels. 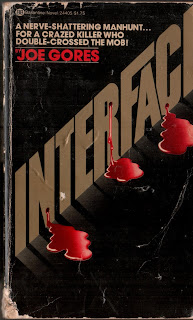 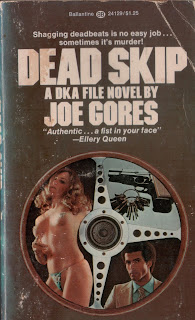 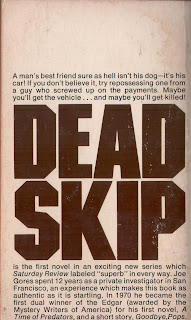 Okay. About the cover of "Dead Skip". You have to realize the time. It was published in 1972. Plenty of pictures of scantily-clad young women were used to sell books back then. I'm not saying it was right, but that it happened. And I don't think that the guy who wrote the cover copy meant that deadbeats who don't pay their bills are slept with. "Shagging" clearly had a different meaning in 1972 than it does now. I gather it has something to do with the sneaking around that's necessary to be successful in repossessing people's things when they don't keep the payments up.

Damn, I loved those DKA short stories in Ellery Queen's Mystery Magazine when I read them as a youngster. I am sure they are still over there in the bookshelves I have set aside for EQMM. I was elated to learn that Joe Gores had written actual DKA novels. And in these days of bloated, overwritten novels that could be twice as good if half as long, these novels were only a couple hundred pages, or less.

If you like, I can scan in covers from some of my other vintage books in my collection. Let me know. This was fun. I have even started a "VintageBooks" label to help you find them, should you want me to do more.

Email ThisBlogThis!Share to TwitterShare to FacebookShare to Pinterest
Labels: VintageBooks