Dozens of  you wrote me. #BevboyDiscussesVintageBooks is trending on twitter. Plenty o' private Facebook messages hit me.

You want me to discuss a few more vintage books.

I had to read this book in university. It was a course about fantasy and Arthurian legend. The professor's interest in King Arthur bordered on the fetishistic.

The first thing we had to read, though, was The Lord of the Rings trilogy. My.God. To this day, I cannot remember being more bored by anything I have put in front of my eyeballs. People find the series engrossing, enchanting, whatever. To me, it was monotonous to the extreme. In order to keep up, which I barely did, I had to buy another book that told me who all the characters were, and what their motivations were, and so on. I would have failed the course otherwise.

My experience with "LotR" was so negative, that it has been impossible for me to even try to read another fantasy series. People go on about Game of Thrones. Haven't cracked them open. Robert Jordan's "Wheel of Time" series is in... what? 13 huge volumes. Jordan died before he could finish it. Can't read them. Haven't tried. Scared of the overwhelming ennui that awaits me.

I may be wrong. I might love those series. But that damn "LotR" series I had to read in 1986 was nearly the death of me. I told the professor how much I despised that series when I ran into him at a science fiction convention back in 1986. He acknowledged that the series is not for everyone.

There were some positive aspects to that class. In addition to the man who would go on to become a judge of the Nova Scotia Supreme Court, I also remember the pretty girl who sat behind me in class. She borrowed my notes once and called me at the house to help her interpret my hieroglyphics. Talked to me before class. When I put myself down one day, she launched to my defense, which was nice, because that made one person in a row who ever did that. Probably stared at the back of my neck and sent me love thoughts during class. I never noticed her until the day of the final exam when she sat in the row ahead of me, to my left and wished me luck on my exam. It finally dawned on me that she might be interested in  me in at least the way a dog is interested in a table scrap, but I had another exam directly after that one and couldn't hang around afterward to follow up. I have never seen her since. And I don't know her name.

Anyway, this series is about books. Let's talk about some.

So, I hated Lord of the Rings. Still do. When the first movie came out, Patricia wanted to see it. I took her. I so expected to be bored, falling asleep, that I was surprised when I was able to stay awake. I believe we saw the next two movies in theaters, too. I tolerated them.

The professor then made us read several King Arthur-related novels. "The Sword in the Stone". "The Dark is Rising". Uh, "Kingdom of Summer". Maybe one other book, and then "Arthur Rex" by Thomas Berger. 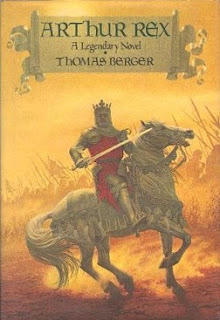 I still have the actual paperback I read back in 1986, around here someplace. I loved the book. Loved it. Laugh-out-loud funny. Screamingly funny. Like, I had to put the book down at my desk at home so I could control myself.

Before class, while Ms. I-Don't-Know-Her-Name was eyeballing me, I'd talk with the guys about the chapters we had just read. We were all laughing while trying to discuss the book.

The women in the class, however, found the book less funny. They found the story sexist. They thought that Berger was a cruel-looking, ugly man who hated women because his characters appeared to be misogynistic. 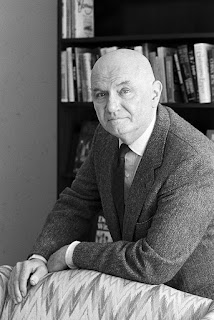 We guys didn't see it that way at all. This book remains the funniest novel I have read in my life. After the class was over, I went back to the university bookstore and bought as many of the remaining copies of the book I could afford and mailed them to friends, likely none of whom read it. I ran into the professor that year and thanked him for including the book in his class.

Thomas Berger's "Arthur Rex", as I mentioned, remains on my bookshelf. In 1993 I acquired a first edition hardcover of the novel, which is on the bookcase next to me. I love this book, and challenge all of you to go out there and read it.

Just don't ignore the pretty girl in the row behind you, okay?

Email ThisBlogThis!Share to TwitterShare to FacebookShare to Pinterest
Labels: VintageBooks