Hmm? What's that? You want me to write about more books I own and like?

Okay. I think it's a little weird, but here you go.

I have been reading, collecting, and enjoying the work of Max Allan Collins for over 30 years. I first heard of him in the pages of Ms. Tree, a comic that he co-created and wrote in the early 1980's. I soon learned that he wrote crime and detective novels, so I started seeking them out.

I now have dozens of his books, probably about two thirds of his works. He has probably made enough in royalties from my purchasing his books to take his wife out to dinner at a nice restaurant.

These are some of my faves, although one of them I haven't actually read. There are only so many hours in the day. 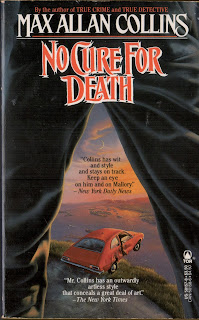 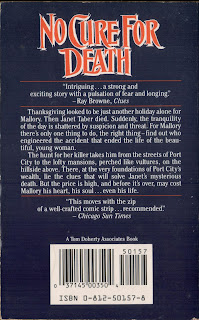 "No Cure For Death" features MAC's character Mallory, a writer in Iowa who solves mysteries on the side. He has stated more than once that he finds Mallory boring, and abandoned the character some 30 years ago. I disagree with Collins on this opinion. I can tell you that "No Cure For Death" is one of my favorite novels of the 1980's. I read it in the summer of 1987 when I was living and working in Sydney, Cape Breton. The final paragraph on the last page made me smile, and still does. It was a perfect ending to what I thought was a nearly perfect book. 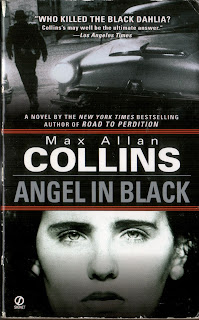 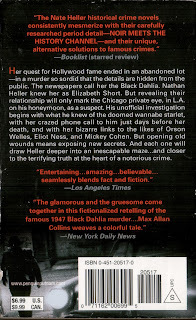 The Nathan Heller series is likely MAC's best known, after the Road to Perdition series. Heller is a private detective whose career spans many historical moments in American history. Collins and his researcher learn everything they can about a particular time and a particular case, and insert Heller into that storyline, extrapolating and speculating on the solution to that unsolved murder or missing persons case. The one from above tries to solve the murder of Elizabeth Short, best known as the Black Dahlia. Another looks into the disappearance of Amelia Earhart. 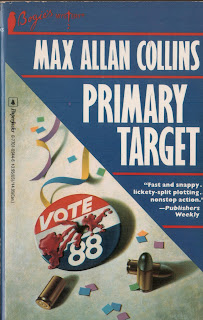 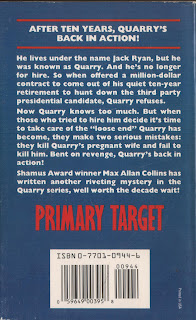 I love the Quarry series. Quarry is a former marine sniper who becomes a professional hitman following his return from the Vietnam war. MAC retired the character several years ago but continues to write Quarry novels that take place during earlier parts of the character's career. There was a "Quarry" tv show in 2016, which you should check out.

To make it easier for readers, the current Quarry novels all have "Quarry" in the title. "Primary Target", published in 1988, was retitled "Quarry's Vote" several years ago, as were the earlier Quarry novels. Quarry's been retired for a decade as our tale begins, until circumstances force him to jump back into action. I read this book when I first saw it, in 1988. I still remember snatches of dialogue! 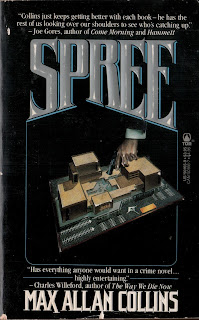 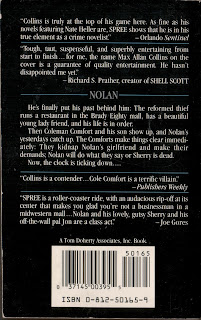 "Spree" I also read in 1988. I recall reading chapters of it on the Dartmouth-to-Halifax-back-to-Dartmouth ferry going to and from work during a period when we had to work a bunch of (unpaid) overtime. It is a continuation of the "Nolan" series. Nolan is a professional thief, getting on a bit, who wants to do "just one last job" and retire. Each last job ends up leading to another one. Once again, Collins abandoned this character, after this novel. Once again, I think this was a mistake. 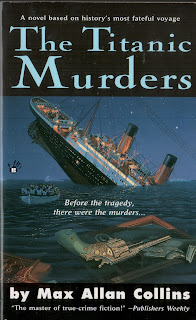 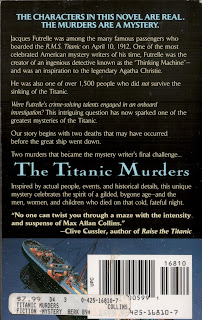 People call this "The Disaster Series". Collins used various disasters like the above, or Pearl Harbour, or the London Blitz, as a backdrop for real-life people to solve fictional murders or mysteries. "The Titanic Murders" features mystery writer Jacques Futrelle, the creator of the Thinking Machine character, who solves a couple of murders before the Titanic sinks. Futrelle died on the Titanic and is all-but-forgotten today. "The Problem of Cell 13" should be required reading for anyone who likes to read a good puzzle story.

By the way, Futrelle was not French. He was a Southern gentleman. I can only speculate that he had some Cajun roots in him, which led to his name.

So, there you have it. A very few of the Max Allan Collins novels I have. I adore this man's writing and wish more people would sample it.

All too often, people turn their noses up at mystery fiction, not realizing how rich and vital and fascinating a genre it is. It has held me in thrall for most of my life. My interest in it has made researching and writing Nova Scotia-based unsolved murders and missing persons cases all the more rewarding.

So, what are you waiting for? Start reading!