And, this year's extravaganza draws to a close. 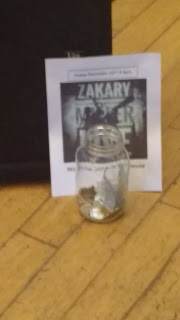 We worked this morning. Then, at lunch time, when government shut down for the holidays, we hopped in the Soul and grabbed some lunch at the Halifax Shopping Centre. On the busiest shopping day in the year. After that, we walked around the mall and noticed how much the place had changed since the major reno's. 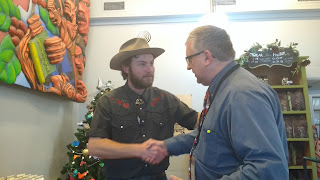 Then the fun began. 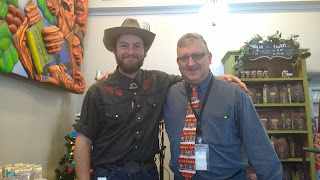 We drove to Wuffle. Went into the Larche store where Patricia got a cutting board that she wants to incorporate into a portable butcher's block type thingy she wants to build after the holidays. Got some food at the IGA-type store there. Then we went to the Just US! coffee shop just in time to catch Zakary Miller, a talented local musician who focuses on folky, roots-based music. Never heard of the guy before, but now I am a fan. And he was kind enough to pose for some pics with me. 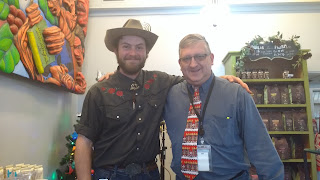 A very nice young man. If he comes to your town, please go see him. You won't regret it.

So, from there, we went to the house for a couple of hours. I had to retrieve a couple ice scrapers from the garage. When a chain store closed in 2013, I bought a bunch of ice scrapers for dirt cheap, and most of them are hanging down there, waiting for me to use them. If you want a deal...

We watched the news. Cindy Day has made her farewells on CTV. She repeated on air that she is remaining in town. The poorly-kept secret is that she will be going to CBC after the holidays.

We returned to the city around 8:45. I cooked some scallops and we consumed them, and have decided we don't want them again for quite a while. They are not the kind of food that a person should eat very often. It is not just the cost. It is a rich food that does not reward frequent eating.

We are still bummed about the death of our friend Rhea Mahar. We anticipate that her funeral will be between Christmas and New Year's. We plan to go. It is upset us both.

And, this brings to a close the 10th annual Bevboy's Christmas Tie Extravaganza. I have no idea whether I will do this again in 2018. I keep saying I have no other places to get my picture taken with these ties, but every year I think of a few. We will play it by ear.

I think I will turn in. Our vacation is here, and we need a rest!

Email ThisBlogThis!Share to TwitterShare to FacebookShare to Pinterest
Labels: Christmas_2017