We are getting that horrific storm, the one that is lashing the Eastern seaboard. They shut down work a bit early, so we left.

But we didn't go right home.

Instead, we went to the funeral home on the Herring Cove Road for Hong Tang's visitation.

The emotions came flooding back. When I first met Hong, I wanted him to learn English better. If he joined Toastmasters I would agree to work with him to help him understand what we were saying. It worked out very well. His English improved by leaps and bounds. A few years later, he left the club, as work beckoned and his desire to start a family, well, also beckoned.

We went to their home out Larry Uteck way, at least once, but we had our lives, and they had theirs. We always figured there would always be time. And there always was. Until there wasn't.

At the funeral home, someone had created a slideshow of images of Hong and his family. Some were taken last week, when he was in his hospital bed. One featured his son laying next to him, with the caption, "Daddy, I'm scared". Hong looked as if he were asleep and may not have known his son was with him. I don't know. Others featured the family's final Christmas together, last week. When we got there, a child was off crying. We think it may have been their daughter, barely old enough to know that Daddy was gone. The others, even younger, likely don't understand.

We bade our farewells to Yue and went to an adjoining room to cry. There is something unbelievably sad about a man stricken with cancer and dying from it at 42, and I can't shake this sorrow. Hong should have had decades ahead of him. He should have seen his kids all grow up, get married and have families of their own.  But, no. It didn't turn out that way.

His funeral is Saturday morning at the Chinese Church at the corner of Barrington and Inglis. We will be there, as early as we can, as it promises to be a huge funeral. And it promises to be bilingual, so Patricia and I will understand what is going on.

I just had to share with you, again, one of my fave pictures of me with Hong. My dad and Mom and I visited their apartment in Spryfield in the Spring of 2004, nearly 14 years ago. They made us dinner, as a way to return the kindness my parents had shown them when they had them over for dinner in the Valley in February.

I am the only one left in the picture who's still alive. Sigh. 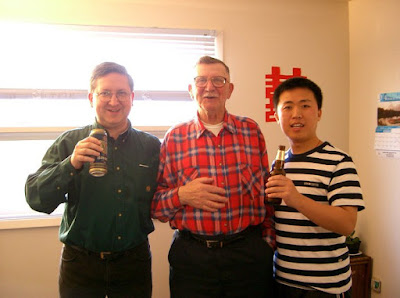 I feel sick. I think I will turn in.

Email ThisBlogThis!Share to TwitterShare to FacebookShare to Pinterest
Labels: HongTang