I have spent far too much time this evening, and during my lunch hour today, enjoying the heck out of a thread on a Facebook page I follow with some interest. It was inspired by something I had written the other day. 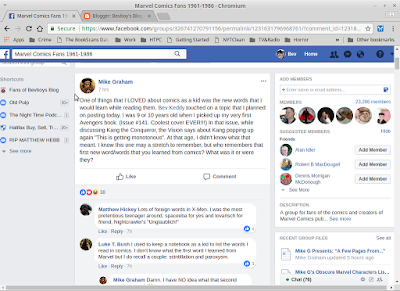 People have been writing at great length about it all day, and I have had a wonderful time reading these posts. Here I am with one of my contributions. 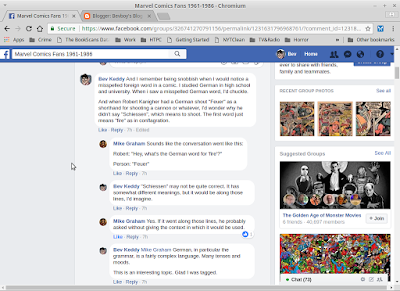 My very favourite made me laugh out loud. Here it is: 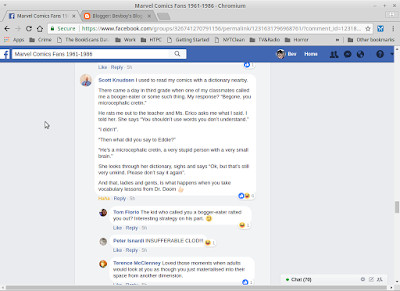 I got such a kick out of this because, well, I learned to read from comics more than I did from anything else. I developed a taste for other types of reading, fiction and non-fiction, but it all came from comics. I sold off 99% of them over the years, but I still remember reading them very fondly. And I remember the insults that, say, Doctor Doom would throw at his minions. "Craven cur" was likely my favourite.

I learned that "laser" and "maser" were acronyms.

I learned that "moribund" means "dying" because I read that a comic book was in that state due to poor sales and was in danger of cancellation, a form of death if you want to look at it that way.

There will be a new Ant Man movie in 2018, with The Wasp as his partner, played by Evangeline Lilly. Her character is often described as "winsome", so I have known that word since I was a child.

I learned that "naught" means "nothing" from reading comics.

I had a job more than 30 years ago when I told my boss I was working on something "for the nonce". He told me he had not heard that phrase since he had studied Shakespeare. I got the phrase from reading Thor years earlier.

(Doug Moench and I share the same birthday, by the way).

I occasionally tell people here on the blog to calm down by writing, "Fear not, effendi". Got that from reading one of Stan Lee's Soapbox entries from back in the day, in some Marvel comic, likely from the early 1970's. Probably written by someone else, but you get the point.

I really hope that this Facebook thread goes on for days and days. Grand old fun.

What does this mean to you? Well, not much, except that if you catch a seldom-used word here from time to time, there is a decent chance I got it from reading comics. You know, the scourge of literature.

And I have paid it forward a bit in my Frank articles. In one I did in the Autumn, I could have stated that a man was so "sad" that he took his own life, but wrote "disconsolate" instead. My editor did not change it, so it was all good. I am pretty sure I got that word from comics I read as youngster.

Now, begone, ye vile miscreants. I must needs sleep ere the morn, lest I be enervated.