I worked during the day. After work, I met up with Patricia at the Casino. I had been looking forward to dinner at the buffet, all week long.

We queued up. Patricia paid. She had forgotten her own casino card, so she had to pay full price for herself, while I got the five dollar discount. We got in quite quickly. The food was... well, it wasn't very good. The beef carvery was fatty. The chicken and fish were nearly cold. The mussels were swimming in grease. The pizza slices were doughy and gross.

Desserts were not much better. The rice pudding was acceptable. The white cake was okay. The bread pudding, which used to be the best thing they ever offered, looked desiccated, nearly mummified.

I did see an old friend from the Valley, though. Dave Hines was a photographer down there for many years. He took my university grad photos, actually. My dad knew his dad. We chatted for a few minutes, and caught up somewhat. Nice to see him, and meet his wife.

That was the best part of the meal.

We got up to leave and noticed about 18 people lined up to get into the buffet. They had already paid, so there was no backing out. I wanted to tell them to run away from the place, not to waste their money, or cause rack and ruin to their colons. But it was too late for them. Too... late.

We had thought about playing some slots, but the meal was so disappointing that I couldn't bear to lose money on top of that, so we went home. My body conked out early, and Patricia's gave out not long later.

Today, we have spent the day inside. I got my b'day present that I didn't get yesterday. It is a solar-powered radio/flashlight. It also has a weather band, so I can listen to the weather all day long. I have the radio upstairs, outside the bathroom, in a window that gets plenty of sunlight. 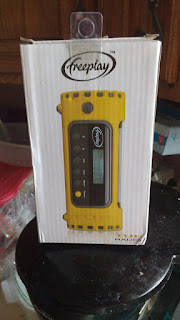 We had looked at some other such radios a couple weeks ago, at the MEC in the downtown. They all looked flimsy, cheap even. One had a built-in bottle opener, which was neat; but it looked as if it were about to crumble to pieces if I looked at it hard. The freeplay looked much more rugged than the others, with the only vulnerability being that the radio antenna is not protected when not in use.

The flashlight is decent for what it is supposed to do. There is the ability to charge the device via usb, solar, or a big wind up thingy. It has a headphone jack, and one can allegedly charge a cell phone or other device via a mini usb connection. Not many devices have a mini usb connection any more, so that will likely not be used too much. I can live with that.

I'm pretty happy with this gift. Thanks, Patricia.

So, I'm 54 now. I have more years behind me than ahead of me, unless I live to be 108, which nobody with my last name ever has, or will. I can only hope that as many of my remaining years are as good as I can make them. That is all one can ever hope for.

Tomorrow, Patricia has a thing in Bayer's Lake. I will hang back here and make dinner or take a nap or something. The people who think I am a workaholic would be so disappointed if they saw me.

You guys have a good evening. I will bark at ya on the morrow.