Once again, my body shut down a bit early last night, so no blog post. So the dozens of you who stopped me on the street today and asked why not, know now. I'm sorry.

Patricia had a make-up Pilates class today, so we went there and I had an hour or more to kill. I went to the Good Things Within thrift store. They had, for fifty cents, a Harry Bosch novel by Michael Connelly that I didn't already have. They also had slightly used(!) 9V batteries for 25 cents each. They're alkaline. I am assuming they will work for a spell. I am tired of changing the time and alarms on 12 or so clock radios in the house every time the power goes out and back on again. Yes. I have that many clock radios. Five here in my home office. Five more in the recroom. One in the kitchen. One in the bathroom. One in the master bedroom. And two more in the middle bedroom. I think that's all of them. So, 15 or so. About 12 more down in the Valley home.

Whenever the power comes back on, I spend 20 minutes or so changing the times on these clock radios, and it is a pain in the rump roast. Better to use 9 volt batteries as back ups.

Before you all write me: Don't tell me to throw these radios out. They're like my children. How would you like if I told you to throw out one of your kids because you had too many? You probably wouldn't like it! So, now you know how I feel.

I am glad I got that off my chest.

We were planning to go to the Valley this weekend, but things are going on here that require our attention.

Anyway, after Pilates, we grabbed some lunch at the Wild Leek, a vegan restaurant on Windsor Street, right next door to the used bookstore, and incidentally a block or so away from one of the unsolved murders I wrote about for Frank (I will tell you which one if you ask me nicely). It being Burger Week in Halifax, we both ordered the Philly cheesesteak burger, made from products that never knew what an animal was. It was excellent. Just ask Patricia! 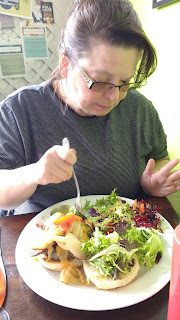 That translates to: the dill dressing lovingly complements the house salad. Meanwhile, the ersatz cheese sauce is generously ladled on the too good to be true "steak" burger. Bev, being a male pig and all, opted for the fries, which were transcendent.

A couple chocolate treats for take out.

Patricia's meal came with a beer, which she reported (slurp! slurp! slurp!) to be quite good, if a titch bitter.

A wonderful meal, utterly meatless, which made us so full that dinner was nearly unnecessary.

We went to the bookstore next door. One of those places run by a guy who occasionally deigns to speak to you. He had a nice selection of Halifax history books. I will go back there soon and get a few, because he had titles I had never heard of before.

He also had an illustrated version of Sam Slick. Sam Slick was the brainchild of Thomas Chandler Haliburton, who lived in Windsor and was a judge here the better part of 200 years ago. The character's wry commentary on life in the province back then was extremely popular in its day. The "sketches" sold along the lines of Charles Dickens. And Haliburton's character coined/popularized several sayings that entered the vernacular and remain known to this day. "Quick as a wink". Uh, other ones. Like it or not, Haliburton helped found North American humour.

I first heard of Sam Slick, and Haliburton, more than 40 years ago when my Grade Six teacher, the late J. Earl Doyle, spoke of him with some reverence. I was intrigued enough to seek out the books. I am not sure if that was a good idea.

I have a couple copies of "The Clockmaker", which collected most of these sketches. And I cannot penetrate the writing style at all. One time, I got to page two. So I was surprised when people pissed and moaned about Haliburton and Sam Slick, and how racist and politically incorrect the content apparently was. The craven town of Windsor dropped or strongly de-emphasized its connection to Haliburton and to the Sam Slick character. They have not had Sam Slick days for several years now.  The character's complete fade into obscurity will be complete in the next ten years or so. Pity, really.

Anyway, we left the store and went to Sobeys and went home. I did the dishes while Patricia took a nap. Spent a quiet evening at home.

I plan to get up early Saturday morning, or at least relatively early. I think I will turn in.