It is late on Sunday night.

Friday I went to bed early. My body shut down and that was that.

Saturday we got up 8-8:30 or so. We left the house an hour or so later and drove to the Valley for the day. Well, after we had breakfast at Cora's in Clayton Park, that is.

We wanted to check out Kingsport Gala days, but we stopped off in Wolfville first to check out the farmer's market. I got some more Alpine beer, which is five dollars off if you buy two 12 packs of the best beer ever made by humans. End of commercial.

We got to Kingsport. Learned there would be no parade. The yard sales were winding down, but I got Patricia a copy of a Donna Morrissey book. I got a Brita water pitcher for two bucks. Eventually got a new-to-me laser printer/scanner/fax machine for ten dollars, which I don't know if it even works yet.

By mid-afternoon we were getting peckish. We drove over to Scots Bay to check out the restaurant over there, only to learn that it had not opened this year, and the building was for sale. We drove around looking for Ami McKay's house. You know Ami McKay? Author of the Virgin Cure, the Witches of New York, and The Birth House? Her? We were driving up the road where I had heard she lived when we drove past a couple walking their dog. The woman was... Ami McKay!!

We chatted for ten minutes or so, us remaining in the car. I re-introduced myself (we had met before), and she remembered me. Said that she liked my cold case series in Frank Magazine and had nice things to say about my work there, which was very nice of her to say. We drove up the road and got turned around in her driveway, before driving past them again. As we did, I said, "I know where you live!!", and we all laughed. Well, we did.

We continued on our way, returning to the Look Off (we had to pass it to get to Scotts Bay; the cops were doing a roadside check on our way in, but had left by the time we returned), and then up the road where the Ross Creek Centre for the Arts is. It is down a long dirt road, and we didn't feel like finding it, so we returned to the paved road and drove over to Hall's Harbour to the lobster pound.

We found it, but the place was busy. Had to park across from the place and walk back. We were starving. The ordering method is... weird. You go in to the gift shop and regard the menu before walking over to the cash register and telling whoever is there what you want to order. We both wanted lobster, dammit. We told her the size and paid in advance. Someone gave us a plastic container which had our live lobsters in it, along with a receipt and a slip of paper and a metal thingy that held a number on it; ours was 46. We were to carry the lobsters over to the cookhouse next door and give the guy the slip of paper. The man told us that our lobsters would be ready in 30 minutes. We went to the place where you eat to wait for our food. The place was nearly full of "reserved" tables, so we were lucky to get a place to sit at all. We were by the door, which was a bit annoying.

We ordered some onion rings to start, which added to the already-huge bill. They were good. I consumed the cranberry juice I had ordered before the lobster arrived.

Our food arrived. Here is mine: 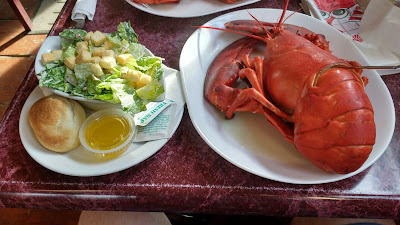 Yeah, this is what $56 will buy you on a Saturday night at the Hall's Harbour Lobster pound. An "extra large" lobster.

Patricia said I went "all Henry III" on my food, and I suppose I did. This is an extremely rare treat for us. Lobster is a very, very exclusive meal. No longer is it poor man's food. It is perceived as such a delicacy and a luxury item that one has to eat every damn bit of it that one can.

I enjoyed the living heck out of my lobster. I attacked it with a gusto that must have made me look like a Neanderthal man trying to impress a Cro-Magnon woman. I ripped and plucked and sucked and dug and pulled, every bit of lobster meat I could find in that sucker. Somewhere, Henry III was looking down on me, nodding with approval.

The Caesar salad, on the other hand, was disappointing. Drenched in some kind of white substance that was far too strong for my tastes. The croutons were from a bag. The lettuce was limp and listless. I did not like it at all and did not finish it.

Patricia enjoyed her lobster, as well, but she passed the body of the lobster to me as that is not her fave. She also doesn't like the tail, so I got those spoils, too.

We eventually finished. I paid for the onion rings, and we left. We went to Kentville to get a few groceries. Returned to the house where I napped for a couple of hours. Got up around 10:45, loaded up the Soul, and we drove back to the city, arriving around 12:15. Patricia went to bed and I put the victuals away before coming downstairs here for a while. I was not tired. At first.

We both slept until noon. I got up, realized I had a headache, took one of my pills, and returned to bed. I didn't really get up for the day until nearly 4pm. I grilled some burgers on the barbecue and we ate them along with some tomato slices.

After dinner I cleaned out the barbecue, which had more than a little bit of charred food in it, and grease. Pretty gross, actually. The grills were and still are soaking in the sink, along with the drip tray.

So, another Canada Day is behind us. We don't have much to show for it, other than a level of humidity such that sweat is running out of every poor in our bodies.

We are on vacation this week. We need to get to the cottage to mow the lawn there as we haven't been there yet in 2018. The lawn must be at a mark where the trespassers who feel they have a right to wander over the property are severely inconvenienced. Shame on us.

I think I will turn in. Try to get back to a regular sleep pattern.

See you tomorrow. Or, later on today, depending on how you look at it.