Hello there, you ruggedly handsome person, you.

Another weekend is behind me. Where do those cursed things go, anyway?

Saturday morning, we got up relatively early and headed out to the Valley for the day. Patricia wanted to attend a craft thingy in Berwick. We decided to postpone it. Patricia watched some stuff on Plex while I did some other work. I got a pizza for us at a place in Kentville that was... well, it was all right, I guess. Got some other food.

We also checked out, earlier in the day, the SPCA thrift store in New Minas. Weren't really sure where it was, but based upon some instructions found it with no problem yesterday. Lots of books, and they were even cheaper. And even cheaper than the even cheaper because they have a "stuff a bag" program, where you stuff a Sobeys bag full of books for one dollar. The girl charged me that much for eight books because she figured that is how many I could have stuffed in a bag had I had one.

I look forward to returning there, and soon.

We stayed in last night. I made French toast for breakfast this morning before we did the dishes and closed the house up again, prior to our trip to Berwick. The craft thingy was in full swing. I was bored within nine seconds, so I wandered around to a hallway showing "bricks" that people had donated to help pay for the construction of the new fire hall. I noticed this one. 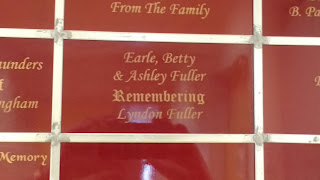 Yes, this is the Lyndon Fuller who disappeared nearly a full 30 years ago, from the hospital in Berwick. Jumped out of a third story hospital window and ran off into the night and hasn't been seen since.

I have my doubts about that whole narrative. Not one shred of proof, but enough things don't add up that make me think certain things about what happened just are not true. I look forward to the day when I can write a follow-up article about his disappearance.

I wrote a four page article about Lyndon and his disappearance in Frank in 2016. That issue sold very well in the Valley, as you might imagine. His disappearance is still a matter of some discussion down there. One of the more famous missing persons cases in the country, actually.

We got back to the city mid-afternoon. We were both tired so we took a long nap. After ignoring us for a spell, Newbie warmed up to me and curled up on my lap while I slept.

Tonight, I shaved and showered and shampooed and am not ready to return to work in the morning. Can hardly wait.