Well, I had a momentous day. Let me tell you about it.

We were told to assemble at the Westin Hotel in the south end by 8:30 today. Patricia, Jamie from my work, and I piled into a cab and got there just in time. We registered and were led to the appropriate section. I was put in the 25 year section; Jamie in the 30 year one.

A couple of folks played familiar songs to us on violin. Public Service Commissioner Laura Lee Langley had some introductory remarks. Then we had the Premier's Awards for Excellence, which was pretty interesting.

Then the main event.

Starting with the 25 year folks like me, people were rounded up, row by row and marched over to the area just left of the dais. We gave the little blue card we were given that had our name and department name on it to Laura Lee, who read it aloud while we walked over to the Premier and Minister Tony Ince, minister of the PSC. Premier McNeil gave us our little award, in my case a pin suitable for pinning to my jacket that said I was a 25 year veteran. He congratulated me and shook my hand. I was put on a mark and McNeil and Ince posed with me for a couple of pictures before I was shuffled off and the next guy went on. It is a very efficient operation. Something like 300 people went through this procedure, and it was done in under 90 minutes.

I haven't got my picture with the Premier yet. Patricia took some other pictures of me up there. When I get them I will post them here and on my Facebook.

Afterward, we all went to a reception room where they served light snacks. But my department went all out and invited staff to a luncheon at the Old Triangle, on Bedford Row, downtown. Patricia and I walked there from the Westin. A nice day for a stroll. We got there, went upstairs to the private reception room, and sat down with Jamie. Lots of others were there.

We could order whatever we wanted off the menu, with the employer picking up the tab. The only exception was alcohol. If you ordered a beer, a glass of wine, or some hard liquor, you paid for that out of your own pocket. I had cranberry juice. Patricia had water. I ordered a ploughman's lunch. Patricia had a pastie thing, kind of a shepherd's pie, stuffed with chicken and mushrooms and allegedly some ham. My ploughman's lunch was too much for me to finish. Patricia loved her lunch.

The deputy minister gave us all long service award plaques. Here is mine: 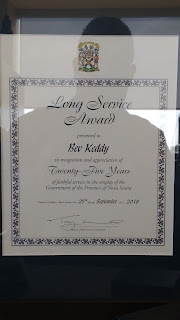 By 2:15 or so, our Executive Director drove Jamie and me back to work. I spent the rest of the afternoon trying to be productive, but not really succeeding.

25 years. Where has the time gone? My goodness, I remember my first day as a civil servant. I was getting some papers signed so I would be paid. The man who helped me through that process was older and not far away from retirement. I could not imagine, could not fathom, remaining at any job for that period of time. While I have moved from one department to another over the years, my employer has remained the province all this time. Go figure!

I have tried never to take my job for granted. Nothing lasts forever. But I have been luckier than so many others to have not had a moment of unemployment in more than 30 years. A sister would sneer at me and say, "You have a government job!" as if that were a pejorative. It was bitterness on her part, is what it was.

I have always been grateful to have work, even though I have not always liked the work I had, if that makes any sense. Too many others I know have struggled to attain, and retain, employment that I would be a fool and a cad to take this or any other job for granted.

I do not know how many more years I will remain a civil servant. I have some ducks to line up that I haven't told you about yet, which continue to keep me chained to my desk for a while yet. But when that day comes and I retire, I will look back fondly and with gratitude toward the years I spent working for the province. Today's award ceremonies really drove that home for me.