Thursday and Friday I turned in early. In fact, Friday night, I got home from work and was dozing off during the supper time news. I went down stairs "for a few minutes" to "take a short nap", and was down for the evening.

We had a very nice afternoon. We went to Hatfield Farms in Hammonds Plains. It is an actual farm and wood mill that they commercialized such that folks can go out there and recreate for periods of time. My union arranged the event. Ten bucks per person. Well spent. They took us out to the lounge via wagons pulled by horses. Unlimited non-alcoholic beverages, hotdogs, fries, and hamburgers. A zipline. A bouncy place where you could pretend to fight someone. An urban cowboy mechanical horse. And some good people to hang out with.

Before it all started they had a petting zoo. Patricia befriended some goats.... 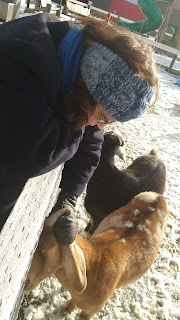 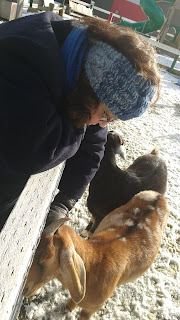 They get rowdy, those goats. You don't mess with them...

The zipline was great fun. Getting up there scared the hell out of me. But I got my legs on the "swing" and grabbed on to the rope and held on for dear life. As soon as we started to zip along, I was laughing.

Patricia took quite a bit of convincing to try it. She nearly gave up when she got up there. But once she started zipping, she had a great time, too.

I do recommend Hatfield Farms for your corporate retreat, large-ish party, or whatever. I hope our union does this again. It was a great idea.

We left around 5:15 and made it to the Home Hardware in Tantallon just as they were closing. They let me in because I had cash and I only wanted a few wood screws.

We got back to the house and watched some episodes of "Outlander" on Netflix. Washed some towels and blankets. And a little while ago I used four of those screws to mount a pencil sharpener that I rescued from the Valley house last weekend. There is a story about that pencil sharpener, and I will share it with you now.

When I was... 14 or so, when I was attending Kings County Academy in Kentville, the school where i was bullied every damn day, there was one day when I saw the janitor unscrew a metal pencil sharpener from the wall and throw it in the garbage. A student had done something to cause a dent in the pencil sharpener.  Not that big a dent, in my opinion. It didn't look like a grave injury to me, so I fished it out of the garbage can and took it home. That evening, I asked my father to screw it in to a bookcase or something in my bedroom, which he dutifully did. It worked flawlessly for me from that night on.

That pencil sharpener got me through the remainder of junior high school, senior high school, university. In 1985, my sister and I switched bedrooms, and the pencil sharpener came with me. I left it behind when I moved to the city in 1988. It remained attached to the underside of a bookcase all these many years, unused, and probably feeling unwanted, until a week ago, when Gary and I removed that bookcase from the wall and unscrewed the pencil sharpener. I brought it back to the city with me a week ago. I lost the four screws that had attached it to the bookcases for the last 40 years somehow, but that's okay because they were stripped anyway. That's why I needed new ones this evening.

The pencil sharpener is now attached to the side of an old entertainment center here in my home office. I use it to hold books and some old computer equipment and the thousands of Bevboy's Blog business cards that I will never go through. And, you know what? I had a package of ten pencils here. I took one out and sharpened it. It is a beautiful thing to behold, that pencil. The pencil sharpener worked just as well as it did all those years ago. I still squirted a bit of WD40 on the mechanism and the handle, and it turns much easier now. There is no reason why it should not last me for many more years to come.

Here it is, where it belongs... 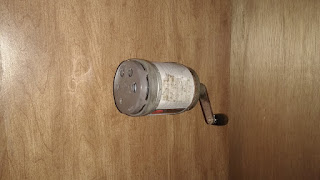 We have an automatic pencil sharpener at work. You stick a pencil in, and it tries to sharpen the pencil. It doesn't do that good a job. But the one I rescued from the Valley still does a magnificent job, and I am so very happy that it has a new home here. If you're nice to me, I will sharpen your pencils with it. If.

No. I don't like so-called mechanical pencils. I had to write a test with one nearly about a year ago and asked to have a regular pencil, which my manager was kind enough to get me.

I know that this doesn't mean much, if anything, to you. But it means something to me. Anything that reminds me of a pleasant memory of my childhood, and young adult hood, is something I wish to cherish. The house down there is on the market, and there are many memories I have of that place. Good ones. Bad ones. Indifferent ones. For some reason, that damn pencil sharpener, with its dent in it created by some punk kid in 1978, is a symbol of a more innocent and happy time, and I will keep it into perpetuity.

Patricia and I have an early day, Sunday. I will tell you about Sunday night...