This one was special. My friend Brad Dryden at Mix 96.5 in Halifax reached out to me on Facebook and invited me to drop by the studios for a quick chat and a Christmas tie picture or three. I also would have the pleasure of meeting Natalie Fournier, his co-host. 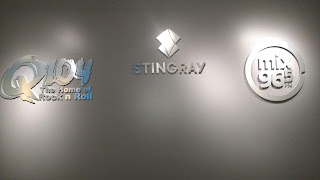 How could I say no?

So, mid morning on Thursday, I drove to the studios, about a five minute drive from my work. I presented myself to the receptionist, who called Brad to fetch me, and who then gave me an authentic Mix 96.5 pen. Not one of those fake Mix 96.5 pens you may have heard about that explode in your face once you push that little button. This was the genuine article! 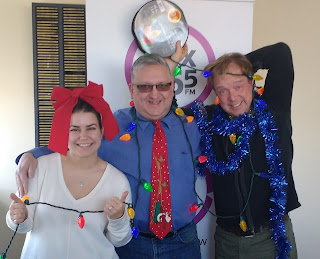 They came and got me. Natalie was even nicer than I had heard, by the way. They took me into the studios. I had last been there back when Griff and Caroline were still at the former KOOL FM. Since they were let go in 2013 and are now at ... an opposing station, and the station changed format also back in 2013 to Radio 96.5. Many, many, many changes in staff later, they threw in the towel and morphed to Mix 96.5, which I think we can all agree is an improvement. 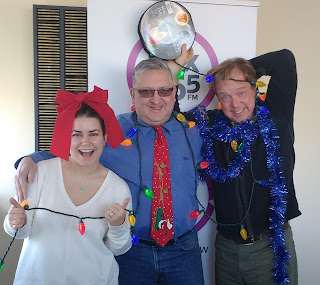 In studio, we chatted about radio, and some recent developments in the market. It is a conversation I enjoy having. Some people like to talk about sports. I like to talk about the comings and goings in local radio markets. And local unsolved murders and missing persons cases. Sue me. 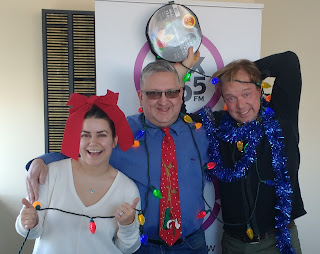 About 10:25, I left Brad and Natalie and grabbed a sub at the nearby Subway before returning to work. I took a shorter lunch hour to make up for the extra time I was gone.

Brad, my friend, it was a pleasure to see you again. I regret that I hadn't kept more in touch when you returned. And, Natalie, what a distinct pleasure to meet you yesterday. I hope our paths cross again.

Day nine is down and out. What happens in day ten? Wait a few minutes and you'll find out!

Email ThisBlogThis!Share to TwitterShare to FacebookShare to Pinterest
Labels: Christmas_2018