Day ten, already? What? Are you kidding me?

No. I am serious. Deadly serious. Serious as a hangnail on date night, folks. That serious.

Meet my friend Frank Sabean. I first met him a couple of years ago, at the McDonald's on Quinpool Road. I had just ordered some breakfast and looked over past the garbage cans. This older man was looking over in my direction.

I thought I was looking at a ghost. This man, who was wearing a hat, looked for all the world like my father, who had died in 2010! 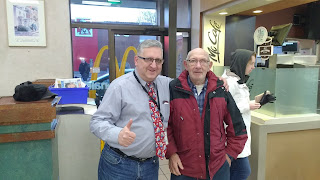 My jaw dropped open. I shook my head. I rubbed my eyes. I turned away and looked back again. But, nope. The man was still looking in my direction.

After I got my food, I wandered over to this man and apologized for staring at him. I told him who I was and why I was behaving that way. He asked if my father had passed, and I said he had. The ice broken, I introduced myself. He did the same thing. 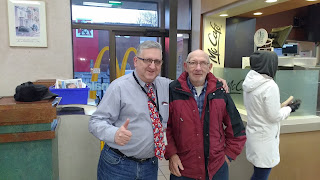 Since then, we have had a sporadic, but pleasant, series of altercations. We run into each other at that particular McDonald's, including this morning. Patricia has met him quite a few times, too, and remarked on the similarity in his appearance with Dad's.

I met Frank during a vulnerable period in my life. It was a year after my mom had died. I was growing used to being estranged from the remainder of my family. Seeing this man I suppose reminded me of the family I no longer had. It was a strange feeling, but I have grown used to it. 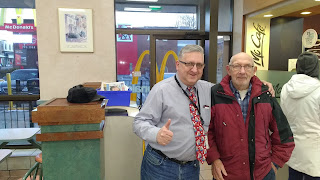 Frank is a good man, with a grown family. He was a working man like my father was. I am honoured to have met his acquaintance and to see him from time to time.

And he bought me a coffee this morning!!

And I will see you soon, too, my lovelies.

Email ThisBlogThis!Share to TwitterShare to FacebookShare to Pinterest
Labels: Christmas_2018