Lots of sleep the last couple of days. Perhaps too much. It is now nearly 12:30AM on Monday morning. I am off work on Monday, so I can afford to have a late night. I imagine I will be awake for another couple of hours. That's fine by me.

We have had a quiet couple of days. Saturday I only went as far as the post office to pick up a parcel and then in the afternoon to cash in the cans that had accumulated in the last couple of months.

The parcel contained magazines I bought off an American acquaintance. They are vintage back issues  of The Saint Detective Magazine. The Saint, if you don't know or recall, was Simon Templar, a vintage Robin Hood-like criminal who also looks after himself financially. The original stories by Leslie Charteris ran from the 1930's through the 1960's. The magazine appeared in the early 1950's and ran for 13 years or so. I now have some issues from that run, where until yesterday, I didn't have any at all.

If you know the character at all, and are of a certain age, you may recall the Roger Moore tv series, or the much later one starring Ian Ogilvy. Or maybe you remember the 1997 Val Kilmer abomination of the Saint. Or maybe you have heard an episode or three of the Saint radio show, starring Vincent Price.

Anyway, each issue contains one, sometimes two, Saint stories. Some of these tales were reprints, and some were new. Other stories were by the writers of the day like Donald E. Westlake, Lawrence Treat, Cornell Woorich, Edward D. Hoch, and so many others.

Here are a few sample covers, to show you what fun awaits me. 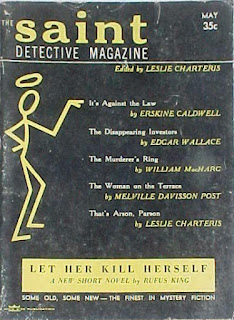 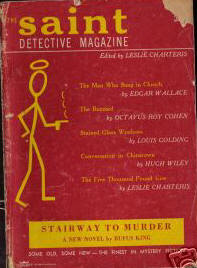 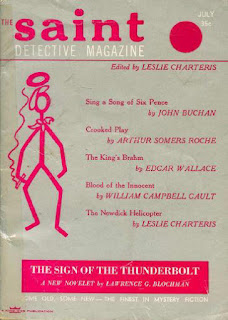 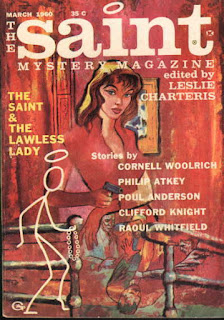 Bet you can hardly contain yourselves, wot? Get your own!

There were an awful lot of crime fiction magazines back in the day. The Saint. Manhunt. AHMM, EQMM. Charlie Chan had a mystery magazine for a short while. Mike Shayne's Mystery Magazine was a mag that paid very poorly but didn't care much what writers produced, so long as it featured some crimes and preferably some private investigators. I have about three dozen issues of "MSMM", about 10% of all of them. Several writers popular today got their start there. Even if you discount the pulp magazines of the 1920's-40's, there were plenty of other crime fiction magazines, a couple of which continue to be published.

Heck, if you want a Nova Scotia connection, ex Chronicle Herald hack Dean Jobb now writes an online column for Ellery Queen's Mystery Magazine. Here is a link to these articles. You can follow the link to read all of them if you wish.

My interest in crime fiction goes back to when I was 11 and a young man up the hill from us was selling magazine subscriptions from his school. Dad agreed to buy me and my sister a magazine "as long as we read it", as he stated, as money was scarce and he didn't want to see it be wasted. I looked through the catalog listing the offerings and saw something called Ellery Queen's Mystery Magazine. The Ellery Queen tv show was on the air that year (starring Jim Hutton and David Wayne) and I loved the show and thought I'd try the magazine.

The first issue I got was the March 1976 one, which I read in one evening, cover to cover, to hell with my homework. But the first issue in the subscription was the February one, delivered to the wrong home. I eventually got it and read it toot sweet as well. Every month, for the balance of the year, I got the latest "EQMM" in the mail, and I would read the issue cover to cover. I developed a love for crime fiction, and in particular, for the short story, which I still feel is an underappreciated literary art form

EQMM got me through some hard times. After the subscription ran out, I could only afford to purchase the magazine at stores from time to time, but by the end of my high school days I had made it a priority to read the magazine on a regular basis again. Sister magazine Alfred Hitchcock never interested me as much, but i have grown to appreciate its charms and strengths over the years and have a few hundred back issues of it. But I have issues of EQMM going back to the mid 1940's, and have long, seldom-interrupted runs of the magazine starting in the mid 1960's through to the issue that came out last week.

I am not sure where I am going with this. I have written about my affection for crime fiction over the years as evidenced by the "ElleryQueen" and "EQMM" labels the blog has. I have told you about this stuff before. But it bears some repetition to tell you about the things that interest me, to let you know that those things still interest me. Just this evening I was sifting through some of the old Alfred Hitchcock anthologies in search of stories written by Jack Ritchie, one of the best short story writers of the 20th century, in my estimation. What that man could produce in, say, 2000 words would take a less skilled writer 10 000 words to do half as well. There are so many other examples of short story writers who can tell a complete story better than some novelist who doesn't know when to stop.

I think I may read a short story before I turn in. So, pleasant dreams, my friends.