I am on vacation for several days. I return to work on Friday the 18th. I do that to provide coverage for the team I am on. Not complaining. It is just that people will wonder why I am off work for a week before returning to work on Friday and then having another two days off.

I am glad I was home today. The folks who helped out during the flood of 2019 dropped by today and picked up the now-useless couch. You will recall that it was originally in one piece. Then, it was in two pieces. And, finally, three. The numbnuts mover took it apart without my consent and then told me that he had left instruction for its reassembly with the manifest. Ha ha. Silly manifest. No such instructions were left with anybody, so we got the thing back in July in two pieces. An attempt to put it back together left it in three. We spent time "negotiating" with the company that orchestrated this moving and return. After going back and forth for a few months, they offered us less money than is necessary to purchase a new such couch. We threw up our hands and said fine. We will take the money. We just want to get on with our lives.

Anyway, two guys from that company came by this morning to take the pieces of the couch away along with boxes I had bundled together. The boxes had contained some of the books and crap I had accumulated during my misspent life.

Most of the books are now unpacked. Because the couch is no longer there, there is now actually some space in the recroom. It motivates me to make more room in there in the coming weeks.

Do you want one small example of books that I hold on to, for no particular reason? How about three? OK. Observe: 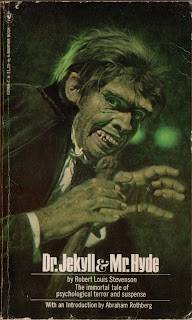 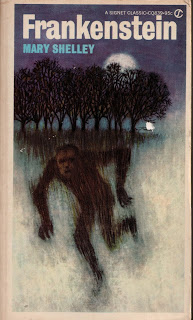 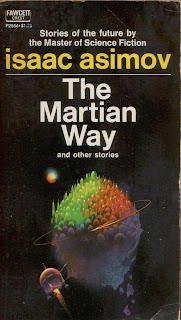 Two seminal genre novels from long ago, and a reprint of some good stories by the good Doctor Asimov. I got those three books, and at least one other (which I still also have) for Christmas...

Yes. That long ago. Nearly 43 years. I was 12 years old. Grade Seven. Attending Kings County Academy in Kentville, Nova Scotia. The school where I was bullied every damn day for three years until I left and went to senior high school in nearby Canning. Where I wasn't bullied at all.

By that time, just a few months into the school year, my self esteem had already taken a major hit, not that it was that great to begin with. I had already begun to retreat into my books and comics. The radio I had got for Christmas two years earlier I think I still had. Whatever radio I listened to back then helped get me through those very trying times.

My mother bought me these books for Christmas that year, and many other years, with whatever meager budget my father had provided her with. She did most of the Christmas shopping for all of us. She could stretch a dollar until it hollered.

I do not know why I received these particular three books that year. I had not asked for them. I had not expressed any interest in reading these books. I can only guess that my mother, fatigued, had wandered into a book store and perhaps listened to some advice from an underpaid employee about what cheap books she could get her son for Christmas and decided on these ones.

I have never read them. I find Shelley's writing style to be impenetrable. Stevenson's writing was always more accessible. At least he understood that people like to read stories where there is conflict and things happen, and that word economy is an important aspect of writing. Dr. Jekyll and Mr. Hyde runs barely 100 pages. His wife had been so horrified by the original version of the novel that she burned in the fireplace. He rewrote it from scratch. And I have had a decades-long flirtation with Asimov. I came to quite admire his mystery short fiction during that period in my life, but his novels did not do much for me. These science fiction stories were about subjects that never overly appealed to me.

Why did I keep three books that I have never read, and likely never will? A mighty fine question. Why would anybody who likes books have a library full of books he has read, and none which he hasn't? Multiple that my the many, many books I have not read, and you have an idea of where I am going with this.

There's that, plus the fact that my mother bought them for me. She did it for a reason I have never begun to fathom. But mixed in that murky, unknowable reason is one simple thing: love. She loved me, and the other kids, and one presumes her husband. Mom wanted me to have these books, so I wanted them as well, through some weird osmosis, an alchemy that existed when you put the two of us together. I would and could no sooner part with these books, than I could part with an appendage, or one of my home computers, or this model m keyboard that I got for 50 cents two years ago.

I was elated when I unearthed these three books a month or so ago. I put them in a prominent place in my home office, on one of my bookcases, and there it will remain, until the time is right, and I finally sit down to read them.

Well, maybe not Frankenstein. There is that problem I have with Shelley.

Off running the roads early Friday morning, and here it is, pushing midnight. Should get a few hours of shuteye.