Well, here we are. Another Wednesday night, and another blog post. Trying real hard to produce something every day for all 4.7 of you.

Actually, one of the 4.7 died last March. Ken was a dear friend who, though 70, was taken from us far too soon. I think of him often, and hope his wife and their daughter are doing as well as can be expected.

We had another quiet day. I was up until something like three this morning. I told you that while I am using the CPAP machine every night, my sleep pattern is thrown off. It is hard to describe, but after many years of what amounted to sleep deprivation, "non-natural sleep" if you will, the fact that the machine helps me achieve proper sleep, and I seldom need to take daytime naps anymore, means that I can keep longer and different hours than I could for the longest time.

If I turn in early, with the mask on, I will often just lay there for an hour or more. I thought it would be better to stay up until such time as I could fall asleep quickly. That meant staying up until three this morning, and not getting up until 10:30 or so. Not the best way to run your life.

We watched some tv shows we like. I made dinner. Patricia is washing the dishes as I type these humble, sub-par words. We will watch "The Masked Dancer" before I turn in around 10, in an effort to get back to a more appropriate sleep pattern.

Oh, here is another sad thing.l A few months ago, a long-used coffee mug gave up the ghost. It had developed a crack, but it wasn't leaking so I said I would keep using until it did leak. Instead, the handle broke off, and I reluctantly threw it off. I was a little sad, and put it on my facebook. Plenty of people wrote in and discussed their favourite coffee mugs as well. It was a nice moment. 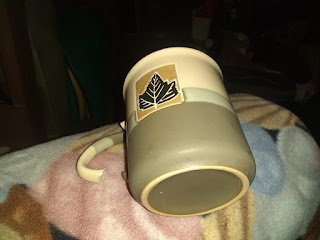 There it is, above. Patricia brought it home from work a couple of years ago. They were going to throw it out, so she thought of me and my interest in smaller coffee mugs, and here it is.

Tonight, a "mate" to this coffee mug had its own handle break off. I am slightly bummed about that, too. It and its older brother were smaller coffee mugs holding a smaller cup of coffee, likely not more than an actual cup of 250ml. I always liked those kinds of mugs as I could more easily justify going back to get more java, which would be piping hot and inviting, as opposed to one large mug the size of a house cat that I would only fill once, but which would become cold by the time I finished it. (The coffee, not the housecat)

So, tomorrow or the next day, or sometime soon, we will go to a thrift-type store and I'll search for a small coffee mug. Maybe two, given my luck with them lately.

On that sad note, I will let you go for the evening.