And it is the end of another record-breaking week here at Casa Bevboy.

For reasons that would likely constern you, I decided this afternoon that I wanted to buy some inexpensive computer mice. A guy on kijiji was selling them for two dollars per, and he apparently had a bunch. We went back and forth and agreed to sell me 10 for $15. A good price. We took off for the man's house, which is in the "old part of Bedford", in a side street behind a well-known bakery.

The problem is, there is no set of instruction, however well written, that I cannot misinterpret to my disadvantage. It cannot be done. Period. End of sentence. Full stop. So, there was that. The other problem is that the street I was told to turn on to, had no street sign on it. So, we missed it. We got turned around and called the man, who explained with great patience where he was. This time,we found another turn off that would work for us, but not before some person cut us off on the Bedford Highway, very nearly causing an accident. They just peeled on out of there. I laid on the horn and slammed the brakes, narrowly missing hitting the big dummy.

We were both upset, and the fact that the man's house was hard to find on that obscure side street served only to upset me further. At any rate, we found the place, I picked up the mice that he had left in a bag, and left the cash under a flower pot.

The drive back to the St. Margaret's Bay Road was quiet for both of us. To get back to some semblance of normalcy, we decided to drop off to Otis and Clementine's in Tantallon. Ellen was having a small Valentine's party there tonight, an effort to get men to buy their sweethearts books. It worked. I got her a couple of the Diana Gaboldon's "Outlander" spin off series about Lord John. We have seen the series and liked it a lot, but the books have not been read by either of us. I get why people would like it, and we are both interested in the Lord John character, so it seemed like a no-brainer.

I also treated myself to a book about Andrew Cobb, the noted architect whose buildings still stand, and whose houses sell with the tagline, "it's a Cobb house". I didn't know this until I researched this for a story for Frank Magazine last year, but Cobb, and three others, died in a freak bus accident in 1943, along the Bedford Highway by Prince's Lodge.

One of the other victims was George Barratt, an early labour leader in the province, forgotten today, but apparently important in Nova Scotia labour in the 1930's and up to his death. I almost literally stumbled on his headstone at the Camp Hill Cemetery on Remembrance Day, 2019, whilst looking for Nadia Johnson's. Barratt's headstone fascinated me, so I took a couple of pictures of it and made a note to find out more about the man. I found out quite a bit, enough to justify a two page article in the magazine last year. 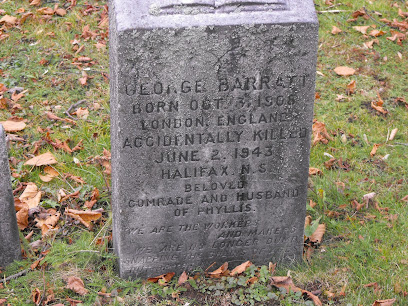 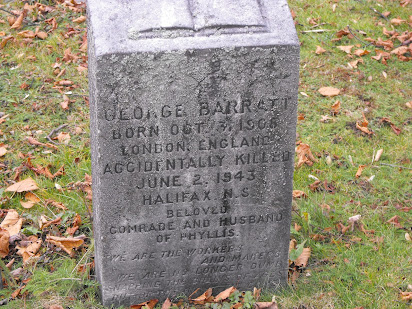 As you can see, George's headstone is shorter and squatter than many others are. I wonder why? The doggerel at the bottom is a few lines from a poem called "Cry of the People" by John G. Neihardt: "We are the workers and makers/we are no longer dumb/snapping the chains of ages/out of the night we come". I was intrigued, to say the least. A long trip to the Archives a year ago helped me find what I could about George. I felt that the man deserved to be rescued from obscurity. I recommend you seek out that article from Frank Magazine last year.

And, just today, I decided to bop around on the net and before long found a picture of his "beloved Phyllis", his wife, who left town shortly after her husband's death, and whose fate remains unknown to me. I will keep looking. Anyway, here is some information about Phyllis from a January, 1940 issue of the Dalhousie Gazette, which I think is still being published. 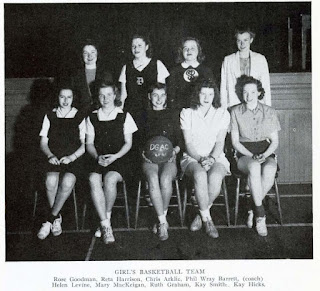 As you can see, Phyllis worked at Dalhousie University in the 1930's up to 1943. She worked as an "instructress" for girls in physical education, back when job titles were genderized and young women of 19 and 20 were still called girls. The first clipping gives some biographical information about Phyllis, which I used to try to find out more information about her, courtesy of my newspapers.com subscription. I did find an article mentioning her from 1945, but that is it. I can conclude only that she remarried and changed her name yet again. She would almost certainly have died quite a few years ago.

The second article was on the occasion of her marriage to George, sometime in the early fall of 1940, so they were married for a bit less than three years before his sudden death.

The third picture shows her with some of the young women she coached. As often happened, her last name was misspelled as "Barrett", when it was actually "Barratt", with an "a". I guess that means that the name was spelled as if it were an "e" in the name, something I had wondered about as well.

That is the funny thing about this research. It never really ends, and one must intuit things based upon what one has already found. It stops, suddenly sometimes, but then some kind of tip, or a different internet search, or pure obstinance on the researcher's part, helps the researcher move the goal post a titch further.

Heck, I didn't even know what Phyllis Wray Barratt looked like until Saturday afternoon, for example. And I see that she was from Alberta, and I surmised that she might have elected to move back there after her husband died. I think she didn't, though.

I will keep looking as time permits.

I am also researching and finding out stuff about the 1955 Michael Resk murder. After 65 years, I have been lucky enough to find original content about this murder, as well as be given a photograph of the man that had never been published anywhere. I am hoping to find more information in the next couple of weeks. Wish me luck. It is very interesting story.

Also heard from a guy recently telling me he may have some information about a missing persons case. Hoping to get that information from him soon.  There is always more to write about.

I think I will turn in. Been a long and trying day. I picked the wrong month to stop drinking.