I didn't write on Thursday because I was dog-tired by 9:30pm. I turned in for the night and pretty much slept for the next 12 hours. I was stressed over Newbie's visit to the vet on Thursday afternoon.

The little tyke is in pretty good shape for a 14.5 year old cat. He is on a kidney-friendly diet and is a bit bunged up, so a gentle laxative, the same a human would use but in a dramatically smaller dose, is being given to him twice a day. We are hoping it will bear... fruit... shortly.

I also got him some new food, also kidney friendly. He has been turning his hose up at the Iams stuff lately for some reason. He has been interested in wet food as well, so I got him a bag of kibble along with a case of wet food, which he likes a whole bunch.

He was good at the vet's, even though getting him there was a chore. Rounding him up for his carrier is always an adventure. Patricia distracted him while I got the carrier, which he somehow sensed I was fetching. She scooped him up and I nudged him in and closed the door. He mewled the whole time. But he was quiet at the vet's. When they took him out for his tests, they took the following picture, which they sent to me on Friday afternoon: 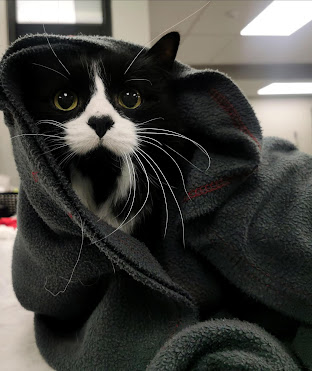 All swaddled and everything. They were so taken with him that they want to put him up on the animal hospital's Facebook page, but sought my permission first. i said it was okay with me if it was okay with Newbie. I made a point of asking him, while the receptionist laughed. When I got Newbie's "permission", it was a go.

While the ordeal took a lot out of Newbie, it seemed to take more out of me. Even if you put aside the financial outlay, which I didn't mind because Newbie is my buddy, the stress affected us both. He took to his new food but was otherwise standoffish for the rest of the evening, although he was fine on Friday. He is in fact literally looking over my right shoulder here on the chair as I type these humble, sub-par words for your enjoyment and edification.

Friday, we returned to the vet's to get a case of the wet food as I had only purchased one can on Thursday. Then we went to Bedford Common, there to check out the Value Village and Tomavo's stores before grabbing a bite at the Sunnyside  Restaurant in Bedford.

Long-time Halifax people would know that Sunnyside was the original name of that part of Bedford. I do not know when Bedford took over that area, but there are still vestiges of the old name, such as the restaurant, and Sunnyside Mall, as well as the office building next door to the restaurant, Sun Tower, which almost certainly got its name from its proximity to Sunnyside.

Anyway, the restaurant left much to be desired. In these Covid times, the menu was much reduced from my last visit there, some 30 years ago. The cheeseburger was okay. The fries were addictive. The water was wet. Patricia said she liked the meatloaf. She paid for the meal as my birthday is coming up.

We drove up through Hammonds Plains to Tantallon to the Superstore, where we got some salmon, on sale this week, along with some other food. I got some cash at the credit union on the way home, and then we drove back to Casa Bevboy. Newbie was waiting for us, wondering where the hell we had been, and why we were late feeding him.

The evening has gone by quickly, as they always seem to.

Another week gone. This retirement thing is interesting, especially during a pandemic. The only reason I know what day it is, is because of what tv shows are on, on a given evening. If they ever switched, say, The Masked Singer to another night, we are lost as to what the day is. Such things keep me up at night.