It is late. Very late. Past midnight.

My sleep pattern is such these days that I stay up late most nights now. It is not like I have to get up early in the morning or anything. Indeed, I could sleep in until noon every day if I wanted to. Sometimes, if I am not feeling well or something, I do. It is not a good habit to get into.

Today we enjoyed some telly. Patricia made a lovely salmon dinner with asparagus which tasted nearly as good as the salmon. It means my pee will smell funny for a day or so, but it is a price well worth paying.

Patricia asked me earlier tonight what was on tap for Monday. I told her that I want to pick up where I left off on Sunday, cleaning up the recroom a bit.

I finally found a book I had misplaced during the flood when it was put in a box with other stuff. I was cursing myself for misplacing it, as the book has always meant so much to me. I have told you about it before, but here is the cover: 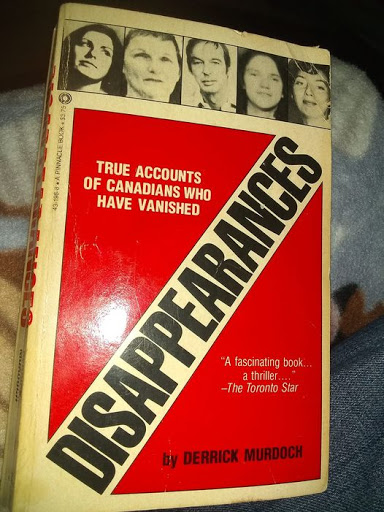 It is the very same book, the same copy, that I picked up around May of 1988. I had just moved to the city from the Valley. I was trying to find my way around the big city of Dartmouth, where I was living at the time. 55 Dahlia Street, furnished apartments. Hated the place. But I digress.

I drove around one Sunday morning and found the Pennhorn Mall fleamarket. I had been to Pennhorn Mall in 1986 when I had worked with a fella at the Bedford Institute of Oceanography and had had to drive him home. Robin Wylie, that man's name was, and he was a hoot. But I digress.

I went to the fleamarket, which occupied pretty much all the floor space of the mall, as this was before the days of Sunday shopping, and the stores could not open. I picked up a few things and decided to leave to go back home. I was heading for the door and walked past a vendor selling paperbacks. For whatever reason, my eyes landed on the above book. The guy only wanted 50 cents for the thing, and I bought it.

I may write about true crime for Frank Magazine, but I don't read it all that much. However, I got that book and went back to my crappy old apartment and cracked open the book.

It scared the hell out of me.

I had just moved to the city. Didn't know many people. Weekends I didn't have much going on and had nobody to play with. I was as single as the number one at a number one convention where no other number one's show up. And this book, extremely well written by Derrick  Murdoch, picked me up and carried me through the next 240 pages, with chapters about people who had gone missing in Canada, and how they were mostly found, and usually quite dead. Murdoch's writing style captivated me. I kept looking behind me as I read it, convinced that someone was going to bash me over the head and carry me off to a fate similar to some of the victims in this magnificent book.

I later learned that Murdoch was a founding member of the CWC, the Crime Writers of Canada, of which I am now a proud professional member, and that there is an award given out in his honour every couple of years. Murdoch wrote about crime literature for the  Globe and Mail for quite a couple of decades and died in the mid 1980's. I would like to find some of those columns some day. But I digress.

I have told people about this book for years. As I moved from place to place, and aged and moved around some more, that book has always come with me, but not always in a way that would make you think I respected it. It would go into a box and be forgotten about, sometimes for years at a time. I had been looking for the book lately and knew it would turn up. On Sunday afternoon, it did.

On Monday I will place it on a bookshelf in such a way that it should - should! - not be misplaced again. The book has meant so much to me and has informed my own approach to writing true crime. In my own small, pathetic way, I want to do right by Derrick Murdoch, to approach my articles with the sensitivity he employed and as clumsily as I can, write with some degree of style and panache. You can decide if I have succeeded at any level. I am too close to the process to gauge for myself.

Yeah, a book I bought in 1988 for fiddy cents and which I have kept all these years is that important to me. I consider it the best true crime book ever written in this country, and it is out of print and unjustly forgotten. Makes me a little sad, but it happens all the time. It is not like anybody will remember my cold case series five years after I finish it.

On that happy note, I will turn in for the evening. Been a long day doing not much.

See you on Monday.