The birthday on the 23rd was nice, though. We went to Mother's Pizza at the Hydrostone. I had the kitchen sink pizza, which as you might expect has a little bit of everything in it. On a nice thin crust with not a crazy amount of sauce, it was nothing short of delicious. Patricia had the tapenade pizza, which is a near-meatless pizza, and she loved it as well. There were quite a few slices left over, and we grazed on some of them on Wednesday.

On Wednesday, we went to pick up our new CPAP machines. They, plus our masks, were fully covered by our insurance, which made us happy.  Here it is. 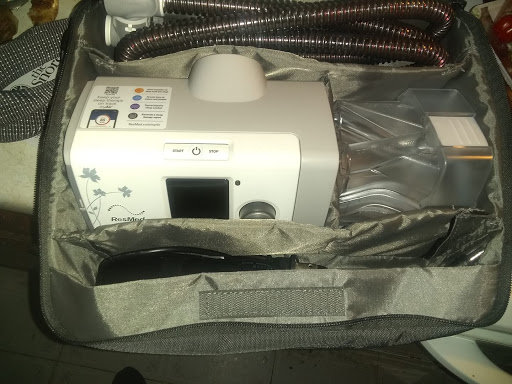 From there, we meandered over to Tantallon, there to meet up with Laszlo Lichter, to pick up a copy of his book about growing up in Hungary after the war. He used to be the mayor of the old county of Halifax, years before amalgamation. It was a lightning quick transaction. We identified ourselves. I gave him the money. We took our leave.

We met in the parking lot of Vernon's Diner in Hammonds Plains, so we decided to have dinner there. It was burger night, so we indulged, and enjoyed them very much. A shared piece of chocolate cake capped off a pretty good meal.

From there we returned to Tantallon to get a few groceries before driving to the Sobeys in Timberlea to get something else, which wasn't there.

We have spent the last few hours watching "Name That Tune", which confounds us with its simplicity, but is still really hard to guess, as we don't know many of the songs they play. Others, we know them, but can't name them before the contestants do.

It is the end of another day. If I were still working, I would be exhausted after three days of working, without having had the benefit of a CPAP machine to combat the sleep Apnea I have suffered from for years now. Now, I am retired, and can focus on my health in a way I didn't but should have all along.

On Thursday, we may, or may not, go for another drive. If it is a good day, then perhaps a trip to Peggy's Cove is in the offing. We'll see.

You all have a good evening. Talk at you on Thursday.