Yes. I know what "perambulations" means. Of course. Er, yes.

I didn't do anything with the printer on Monday. I put it back in the box on Sunday and will put it away until such time as I have used the three remaining boxes of toner on the Samsung ML-1915 printer. I admit that when that blessed day comes, that I will miss the printer. Have had it for such a long time. I had resisted getting a printer for years and years. I figured that, in the year of our Lord 2007, I would not ever need a printer. After Patricia moved in, she began to wonder aloud why we didn't have a printer, so I finally acquiesced in 2012 and got this one that I still have.

I once owned four of these printers, plus a few other laser printers that I acquired very inexpensively. I bought the duplicate Samsung printers because they always came with toner, and I would move the toner to the old printer and keep the printer. I eventually got rid of all but one of those printers. I have kept the duplicate Samsung printer for the eventual day when the first one would stop working, but that day has never come and likely never will before I retire it, and its backup.

The computer equipment I have acquired over the years would frighten you. I have several flatscreen monitors; one of them is hooked up to the all-in-one I got late in 2020 and it provides more screen real estate than I perhaps need, but it is nice to have nonetheless. I thought I had more keyboards than I do, though. I recently looked for one to use as a backup keyboard on this laptop, and had a hard time doing so. Which is fine, because the keyboard on this old laptop is working again. At least it has been the last couple of days.

And I have many more computer mice than I perhaps will ever need.

I went to a store that was selling off old fixtures and bibs and bobs from a restaurant in the Spring Garden Road area, last summer. I got four Bacardi drinking glasses that light up when you put any liquid in them. And I got many pieces of ethernet cable as well. Some really long pieces that I may never use. And some really short pieces that one needs sometimes. All for super cheap. I keep as much of that old equipment in a cabinet in an even older entertainment centre I bought many years ago.

Since the keyboard appears to be working again on this old laptop, it saves me the cost of getting another laptop for a spell, at least in theory. The battery on this one lasts maybe 90 minutes if I am lucky. I know the new laptops' batteries can last for 6 hours or more, so I am a bit jealous.

I find I use this old laptop more than I do most any other computer I own. I am not sure why. I guess it is because I just like sitting in this big old comfy chair in the living room and typing in stuff. It is a convenient and agreeable way to do stuff, so that is how I spend my time.

I should probably mention the death of a friend of mine.  His name was Rod Doiron. I had known him for the better part of 30 years, since the early 1990's, when I was in Toastmasters. I had briefly flirted with the idea of learning magic, so I joined a local magic club. I can no longer remember if I had first met him through TM, or the magic club. 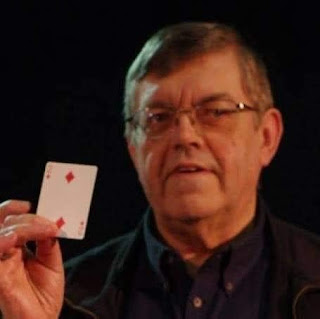 People often found Rod off putting. He had a way of saying what was on his mind, with few filters and little thought of tact or how the tone wrapped around those words might be received. I had worked with one other guy over the years whose filter was non-existent and who would say hateful and vile things to me as a matter of course, so I just took what Rod said to me at face value, which I think he appreciated.  And I appreciated his wise council and the direction he provided.

He quit Toastmasters in 1998 after 20 years of it. He felt he had learned all he would ever learn, and he was probably right. But his interest in magic so far as I know from the online tributes to him never seemed to wane. If anything, it waxed to the point of a passion.

Rod touched many lives, most of which I don't know about. But he greatly influenced a man who would go on to become a Member of Parliament and Canada's Speaker of the House of Commons in Ottawa. When Geoff Regan joined Toastmasters back in the 1990's, he was scared to death of public speaking. Rod was so helpful to Geoff that when he visited our club in 2008, many years after Rod had quit TM, he made a point of mentioning Rod and how his time in Toastmasters had helped him.

I really should tell Geoff that Rod died. I doubt if he knows.

I lost touch with Rod over the years. Our lives went off in different directions, but we certainly knew each other and I thought of him often and fondly. I do not know if he thought of me often or fondly, or at all, but that's ok. He helped me in Toastmasters. He helped me with some magical effects that I struggled with. And he went on to enter the lives of others and helped them. He was that kind of guy.

I don't know what Rod died of. I haven't seen an obituary yet. I have heard one or two details about his death that I am not prepared to share here. I also haven't heard anything about a funeral or a celebration of life.

Ha. Wouldn't it be a gas if he disappeared from his coffin, with some kind of flourish?

Goodbye, my friend. See you on the other side.

And I'll see you guys tomorrow.