I am writing these humble, sub-par, slightly pathetic words from my home office/library here at Casa Bevboy. Patricia is upstairs watching season seven of "Younger" on Amazon Prime. It is a show about a 40 something woman who is frustrated because she cannot get ahead as an editor or whatever the hell it is at some New York publishing house, so she lies about her age and claims to be in her 20's instead. It is not my cup of tea, but even I know that the actress might have been able to pull off the "younger" look in season one or two. It is now at season seven, and I am sad to report that she looks like my mother did in her final years.

We had a quiet day. The latest and very sobering news of the Covid-19 cases in the province have been upsetting to both of us. In a matter of days, it went from just a few cases, to 38, to 44 to 52 and now to 63. The public health folks are saying that the trajectory is heading up, so we may have a higher number of cases for the next 10 days or so.

We are homebodies at the best of times. We like to go out for drives and so on when the weather is okay, but most of the time we are content to stay home and nest. Other than getting some groceries and filling up the propane tank on Monday, I don't think we will go very far at all until we get our first AZ shot a week from Monday.

I do not understand why people cannot follow very reasonable requests from public health to stay home. They are always looking for a loophole. A few people feel that the rules do not apply to them, that they are an abridgement of their human rights, and will damn well do what they want to do. They are the people who are spreading Covid-19 , and I have no use for them. When they get their fines, soon to be $2000, they will scoff at them and then get Daddy to pay them.  They do not care. Perhaps they should be named publicly. That might smarten them up.

I can't remember if I have ever told you about a pretty neat purchase I made a few years ago, which I am using right now. I remember guys from work talking about "Model M" keyboards. I was unfamiliar with the term, until they reminded me of the lovely old computer keyboards I used in the 1980's. They are the clicky, clacky keyboards that have a wonderful spring to them, and which make a satisfying "click" every time you press a key. Maybe not the best thing to use in an office, but I had enjoyed typing on these keyboards back in the day.

Fast forward to a few years ago, and the discussion of clicky keyboards. I went to a thrift store on Young Street one day during lunch. They had a box full of keyboards in the back, each for 50 cents. I routed through it, and pulled out this heavy, bulky keyboard, and I instantly fell in love with it. It resembled one like this: 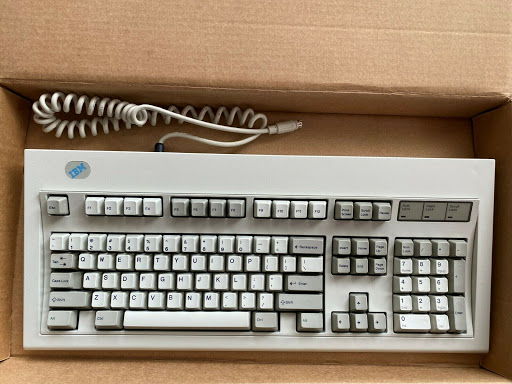 And did I say it was a scant 50 cents? I paid for it and skipped out of the store, and all-but ran back to work. The guy who haunts such thrift stores saw me about to put it in my car and bounded over and offered me $2.00 for it, quadrupling my money. I declined the offer.

That night I hooked it up to my previous desktop computer, old enough to have the legacy ps/2 ports on it. The keyboard was so old that the ps/2 plug was not colour coded purple so I admit I plugged it into the mouse port by mistake. But I got it right the second time. Don't judge me.

I fired up the computer and the keyboard has worked perfectly since then. It was manufactured in 1989 and it is a great delight to use. And it is so heavy that if a bad guy broke in, I could club him over the head with it. Try that with the spongy, crappy keyboards you get with computers these days!

I got that keyboard, I dunno, four years ago. I love it. It works flawlessly. But I wish I had a couple more of them, even if I had to pay several dollars to get them. But there are enough people who know what these keyboards are, and what they are worth to stalwarts like me, that they are often not found out in the wild. I got lucky beyond belief that I got one for so cheap, when I did.

The all-in-one computer I bought over the holidays actually has the legacy ps/2 ports on them, so plugging it in to that was a breeze. But Patricia's all-in-one doesn't have that connection. She has expressed some interest in having such a keyboard, so to do that would mean having to use one of those ps2-usb adapters, but they are not all created equal.

Anyway, if anyone reading this has a model m keyboard to sell for a price a retired person can afford, please hit me up. Maybe we can do a deal.

I think I will turn in.

You all have a good evening. Talk at you on Monday.