There is nothing quite like sleeping in until 11:30 to put things into perspective.

That is how late we slept in today, Sunday. It is becoming a habit to sleep in late and stay up late. I am not sure if that is a bad thing, or just a new norm for us. But here it is, after one ayem on Monday morning and I am very much awake and not at all sure what time I will turn in "for the evening".

Even though I had to do it for decades, I never particularly enjoyed getting up early for work or school or anything else. I oftentimes would start work around 8am, and it never seemed  uncivilized to get up early enough to be at work by 8. I have friends who work in morning radio and are on the air by 6. They often have to get up by 3 or 3:30 at the latest in order to accomplish this. Other than a profound lack of talent, getting up at an hour perhaps two hours removed from a bowel movement seems like an impossibility. I state that with all due respect, of course.

So, since the retirement last year, my "wake" hours have changed. Since I started with the CPAP machine last year, they changed even more. Because I have far less brain fog than I did before I began to treat my sleep apnea, and feel much more rested, I don't take nearly as many naps as I once did and far more alert much longer into the day and night than I once did. The CPAP treatment changed my life, and from what I am reading about the condition, may have prolonged it.

Once I did get up, I prepared a late breakfast of steak and eggs. I washed the dishes while Patricia watched some stuff on the pvr. We watched SNL together this afternoon. It was the season ender. It was refreshing for the cast to admit that this was a crazy year and that more than a few sketches were not up to snuff. Cecily Strong cued the highlight reel, and there was but one highlight running for five seconds. I would not call that one highlight, a highlight. They acknowledged the Mike Pence with a fly on his head skit, which lasted nearly 15 minutes and featured the fly being played by Jim Carrey and a second fly being the ghost of Herman Cain and played by Kenan Thompson, was perhaps not the funniest thing in the history of funny things. It was not, but there were dozens of other sketches on SNL this  year which fell spectacularly short of professional standards. School pageants written by 8 year olds could contain more humour than most of the sketches on SNL this year. Anyway, it was very nice to see them acknowledge that the year by and large stank to high heaven.

The Weekend Update this week was very funny. Michael Che and Colin Jost did their annual "let's write the most racist jokes for the other guy routine", and it was something that we played back a few times. Pete Davidson  had some observations that convinced me that he is underutilized on the show, and is a very talented actor with a bright future if he wants to do the work to get there. I would watch a show with him starring in it. We both liked his "The King of Staten Island" film last year but it tasted like more. It was just a slice of his life, and I want to see a weekly series about the character he played in that little film.

Patricia cooked a wonderful dinner tonight. I found some lobster bits in the freezer the other day. Adding that to some cream sauce and then throwing in some cooked pasta made a terrific dinner with leftovers. Here it is, moments before we dug into it. 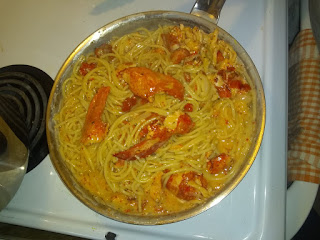 There is enough left, I hope, for lunch or dinner on Monday. The flavours will have melded by then and it should taste even better.

Before any of you jump up and down about our privilege and we must be rolling in the clover, stop. Just stop. The lobster was purchased and decanted nearly a year ago. It sat in the freezer all this time. The pasta came out of a package and cost maybe a dollar fifty. The cream sauce was a couple of bucks. We used up stuff around the house and I don't feel privileged at all, just lucky that we have a stand up freezer to hold all this food we stocked up on.

It is now 1:30. I think perhaps I should try to get some sleep although I am not at all tired.

You guys have a good evening. Talk at you tomorrow.