Sorry I didn't write the last few days. Thursday we were busy running the roads. Friday we... uh, I am having a hard time remembering. I'll tell you about Thursday first; I may remember what happened on Friday after that.

So, Patricia wanted to pick up some plants down Hants County way, so around noon on Thursday we piled into the Soul and headed out. The google maps app told us what turns to take and it worked great. The only thing was, the two day sale had sold out every plant in stock, at 10am on Wednesday. Double plus ungood. But, Avondale Sky Winery was close by, so as to salvage the trip, we went there. 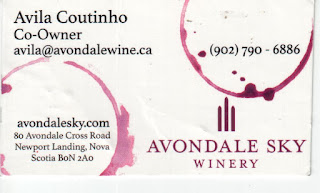 It is the first time we had been there since the original owners, including my friend Lorraine Vassalo, had sold the place. We walked up to the winery's store and found it wasn't open yet, but we were warmly greeted by Avila, the owner or co-owner. Here she is, in her glory: 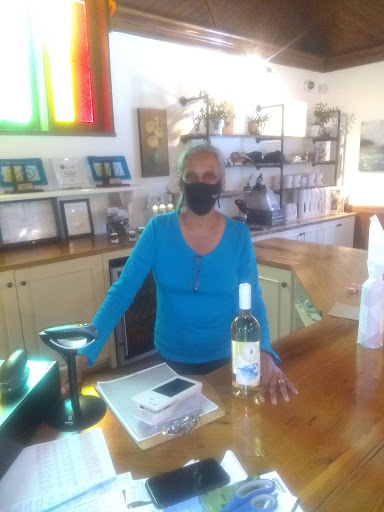 Patricia bought two bottles of wine, including one called Lady Slipper. I don't know if it tastes like lady slippers because I have never eaten a lady slipper, so I suppose the colour of the wine is reminiscent of the lady slipper flowers that grow by the winery this time of year. Maybe I am over thinking this.

Avila was kind enough to show us the new mural, and told us that we were among the first to see it, as it had just been completed. She said that the folks who prepared the Africville murals in the north end of Halifax also did this one, so props. 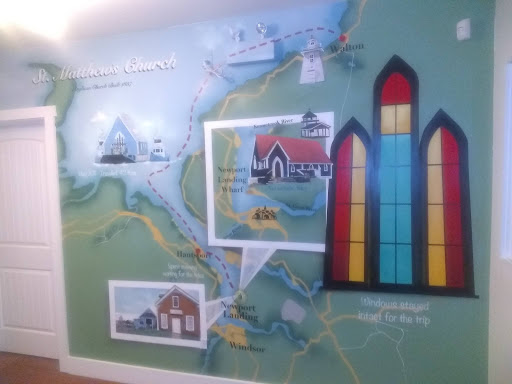 The mural depicts the journey that the winery's store/restaurant took from Wolton to Avondale. For those who don't know, which is likely 4.4 of my 4.7 readers, the winery building is a deconsecrated church that Lorraine and her husband had the vision to transport to their new winery. Many churches in the last ten years or so were sold off in this manner. The church I attended for many years in Canada suffered the same fate, but the parishioners broke off from the United Church of Canada, which had done the divesting, and bought back the church from the man who had bought it from the United Church. Which severely ticked off the United Church people who assumed that the Canard flock would join the new super church they were building in New Minas. They were even more ticked off when some of the Wolfville parishioners joined the Canard church, too. Hee hee. I love this story, but I digress.

Wait! This is my blog and I will take my own sweet time writing these posts.

Anyway, bless Lorraine and her hubby for transporting that old church to Avondale. When they sold the winery to Avila and her family, they honoured the original owners and the the church itself by doing this mural. Bless them for that.

We got there the day before the restaurant would reopen, but we got a sneak peek at the menu and we can't wait to get back there again, soon, and have a decadent meal.

We wish Avondale Sky Winery every success. Any local business that has managed to survive in this pandemic is to be commended for continuing to exist, and these guys are no exception.

We bade our leave and decided to drive to Wolfville, not really that far away and had a wonderful meal at the Naked Crepe in the downtown. I had the smoked salmon. Patricia had the Mexican crepe. That is two terrific meals in a row there, as I had the "Royal with Cheese" the first time. From there we went to the Barrelling Tide Distillery in Port Williams, where I bought two more bottles of their delicious Vodka as well as a shot glass. The glass is pretty neat. It has a "low tide" (1 ounce) or "high tide" mark if you want a drink with two ounces in it. And they have a loyalty card as well. After two more bottles we get a free shot glass. We will need one, soon!

We then made our way to Canning to the meat market there. A very small store, they only let two in at a time so I went in first and got a couple of store-prepared subs. Patricia went in and got some steaks for our Sunday dinner and some pepperoni and some other stuff. All prepared in the store. That meat market has been there in that location under several owners, for decades, long before I was born. They had a store in Port Williams for a short time but they left for some reason and concentrated on their Canning business. The guy who served me saw the Naked Crepe take out menu in my breast pocket and told me they sell meat to them.

While Patricia was at the meat market I went up the street to the small grocery store in town. I got several packages of bacon, the daily paper, and a couple of pies to freeze. The bacon would also be frozen.

We drove around to Kingsport and then back through Canning before making our way to Kentville. We went to the small grocery store and got some chicken thighs for half price and visited my parents' graves. 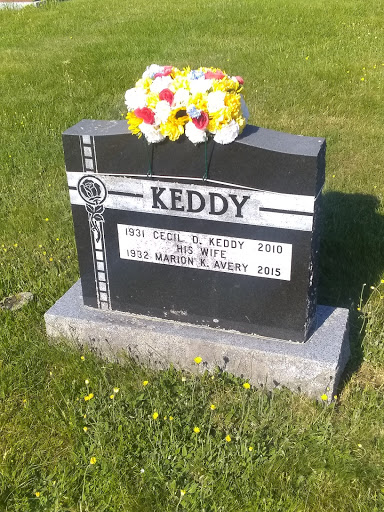 My brother is buried on the other side. Here he is. 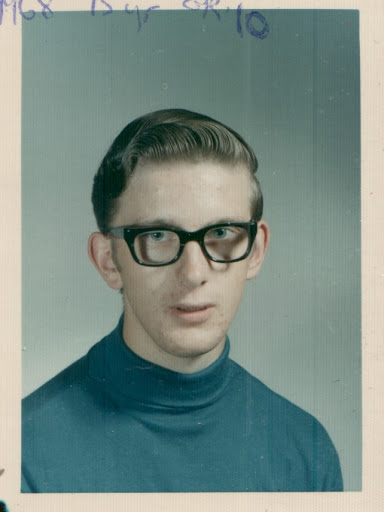 Ernest died of cancer when I was five years old, and he was about two months short of turning 17. I think of him often. He would be 68 years old if he had lived. And everyone wishes he had. I do not know many people who remember him to any degree. I used to be sort-of friends with a friend of his, but I never got around to asking him about my brother, which is a regret of mine. But maybe it is for the best. This sort-of friend is a liar and a cad and betrayed me in an almost-Shakespearean fashion. A pox on him.

Let's see here. We left Kentville and drove to Greenwich to Noggins Corner. They were selling North Mountain Coffee, our fave coffee, in the Columbian medium type, which is delicious. And they were selling it in a five pound bag for sixty dollars. A good deal as the 12 oz bag was $13.

Do the math and you pay 75 cents per ounce on the five pound bag.

So, the sixty dollar bag of coffee, which is crazy delicious, is a tremendous deal to boot. And they ground the coffee for us.

The car smelled wonderful on the way back to Halifax. We stopped off to fill the gas tank, and then went to the local Sobeys, where we got a few staples and a pie.

Two days later, we have been in to the coffee a few times. We have consumed one of the pies. And we still talk about what a great day we had. Retirement can be pretty good.

Friday, I went to the local drug store where they have a deal on eggs. Got some food for Newbie. Drove around a bit. Friday night Patricia and I picked up a ladder shelf from a place in Clayton Park. It fit in the back of the Soul. Today, we both slept in late. I mowed the front lawn this afternoon and then used the whipper snipper thingy to clean things up a bit. Patricia did the same thing out back. Had a good dinner of some of those chicken thighs on the barbecue. Watched the telly.

And now you're caught up.

It is after one in the morning. I really should turn in.

You all have a good evening. Talk at ya tomorrow.