It is Saturday night. I just listened to what I think is the last ever edition of "Randy's Vinyl Tap" on CBC Radio. They cancelled the show because... CBC, I guess. They have not announced what will take its place in the Fall, but I have no expectations it will be something I will enjoy listening to.

I had an interesting couple of days. I guess the highlight was using a jackhammer for the first time in my life. I only used it for a moment. The carpenter I have hired to build a ramp leading into the back hard from my driveway was also asked to remove the horrid asphalt leading from the driveway to the back deck. It was a lousy job when it was done in the 1990's, and only looked worse over the years. Removing it is long overdue.

I told Dana that I wanted to use the jackhammer for part of the job, myself. He called me out, and I used it, and then went back to pose for these photographs. Call them a dramatic re-creation. 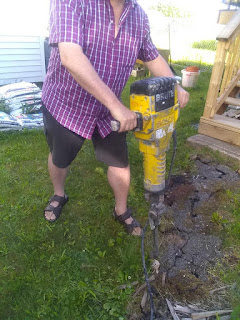 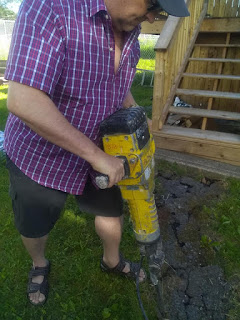 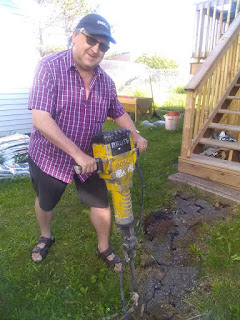 People have been telling me that I was foolish to wear sandals whilst using the jackhammer. They are not wrong. But once again, I only used the jackhammer for perhaps a total of 90 seconds, and then posed for this dramatic re-creation.

I have added appreciation for people who use a jackhammer for a job. The ones they use are far more robust and powerful than the  one we used on Friday to chop up that asphalt. I found the machine heavy and hard to use, although after a moment I was getting a bit of the hang of it. But the so-called professional jackhammers are far larger and the people using them are likely powerful people with muscles on their muscles.

Anyway, Dana scooped up the pieces of the asphalt to take them home to use as fill on his property. I just wanted the stuff gone.

The next step is for him to build the actual ramp, which may come as soon as Sunday. Somewhere along the way, we will get patio stones and place them where the asphalt was. It will look much better than what was there before.

A few other things are being done in the back yard. Adding a step to Patricia's she-shed. Choking off some grass by the shed to move the Veg Trug in front of. But the main thing is the ramp. It means not having to carry the lawnmower from the back yard to the front lawn, or trespassing on the neighbour's driveway to negotiate the wheelbarrow. I know it is silly but I am looking forward to having a silly ramp.

Saturday, I wish I could say I did something, but I slept in. Made a late breakfast. I ended up taking a nap in the afternoon. Showered tonight and now I am here in my home office typing away like a silly person. In a few minutes I think I will watch the last part of the Netflix series about the Son of Sam before trying to get yet more sleep.

Such a life I live. Such excitement!

You all have a good rest of the evening. See you tomorrow.