Had a pretty good day, and found another little mystery. Let me tell you about everything.

After lunch, we hit the road and ended up in Tantallon, where we visited the Antiques, Books and Collectibles store. They have a pretty darned good collection of Nova Scotia books, and I confess I spent a bit too much money there. One tome cost me a mere five dollars and contains over 200 pages of Nova Scotia recipes. Published in 1976, 45 years ago.

One chapter is recipes donated by "notable Nova Scotians" including John Buchanan, Gerry Regan, Bill Ozard, Rube Hornstein, and a woman named Jill Robinson. Here is a page from that cookbook: 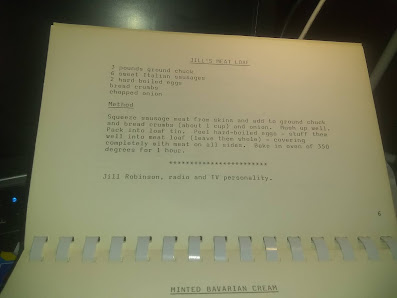 Yep. "Jill's Meat Loaf", an artery clogging delicacy. Jill is Jill Robinson, a "radio and TV personality", and I have never heard of this woman. It is not Jill Kropp, because she is not nearly that old to have been on the radio and the tv 45 years ago.

I have asked about her on my Facebook and the on the Halifax and Area Radio Memories page on FB. So far, people are not sure, so I am asking my blog buddies if they have any idea.

Jill's other recipes were for "black gingerbread" and "scalloped tomatoes".

If you know, let me know. I try to keep up on these things and am embarrassed never to have heard of her.

We left and made our way to the Labor Day Picnic coffeeshop. They call it that because it is a converted church hall and when they were doing their renovations they discovered this old sign that stated "Labor Day Picnic", so they kept the sign, on display, and named the business that.

I had the North Mountain Columbian, a dry roast. Patricia had a latte. She had a date square, so large it was actually a date rectangle. I had a peanut butter cookie. Loved everything.

From there we went to the Finer Diner. We shared onion rings. I had a lobster clubhouse and Patricia had a grilled chicken breast sandwich, which she could not finish so the rest of it went home with us. Great meal and a wonderful location. I keep wondering what that building used to be.

We returned to Timberlea and went to the Sobeys and got a few things. We learned that they no longer produce the good haven bread in store as it was a poor seller, even though it was our fave. That did not stop us from stocking up on 88 cent cans of beans and pasta and tomatoes. There was a good piece of salmon for ten dollars off and we got that. It is now resting comfortably in our freezer. It will make four meals for us.

We watched "The Good Fight" this evening. It is a terrific show that runs on the W channel in Canada. It has commercials but is uncut. And we also watched the second episode of the Leverage reboot. Already, another actor has left the show. It amounts to bait and switch when a show comes back and a beloved character is on it. Then, in the second episode that character's sister appears out of nowhere and the main guy leaves. I think I wrote before that now that Timothy Hutton will not face any legal wrangling over these allegations of sexual abuse, that he should try to get his job back on "Leverage", or be told exactly why.

It is one ayem. I wanna get up early so we can go to a farmer's market. I should have been in bed a long time ago.

You all have a good evening. Talk at you tomorrow.