And how was your day?

We both slept in later than we meant to. The CPAP machine has a funny effect on me. I wake up for a few minutes and decide to go back to bed "for a few minues". Next thing I know it is several hours later. If you care, my AHI, average hourly incidents, was 1.3, which is a far cry from the 42 it was in the Autumn when I had my sleep test.

Around mid-afternoon we realized we had taken nothing out of the freezer for dinner, and we needed to get some groceries, so we went to Swiss Chalet on Lacewood Drive for dinner. As far as we can recall, we had not been there since February or March when a few of us retirees had lunch there.

A great dinner under our belts, we went to the nearby Superstore. I bought the new Frank as I like to have a paper copy of my articles for my records. The article looks great. It is the type of content that if I were just a reader, I would want to read over and over again. I may not be a Dean Jobb, whom I fully acknowledge to be a superior researcher and writer, but I do my best. And since we are mining similar ground, super vintage Nova Scotia true crime, I feel I should be up on his latest work. My focus is on unsolved crimes, though. Dean doesn't do much of that.

Speaking of Dean, I see that he has yet another book coming out. He has now two books of shorter pieces about crimes "from Nova Scotia's past". Here they are, side by side, taken from Dean's Twitter post. 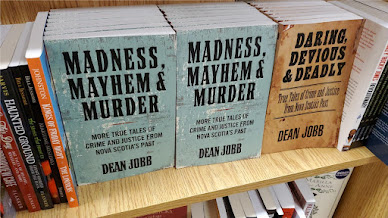 So, the one on the right, "Daring, Devious & Deadly", I already have. The second one, "Madness, Mayhem & Murder", I only learned about this evening. I will probably get it, but I am pretty much convinced that he is just repackaging content from three earlier books he published in the 1980's and 1990's. Those books, in turn, were reprints of articles he did for the Chronicle Herald for many years. These more recent books will consist of reprints of reprints in other words.

That is, assuming that the new book is reprinted material from back in the day. I have seen the list of content for this new book and I have to compare it with the earlier trilogy of books to see if there is anything in the new book not in the older ones.

I am not upset about this. I know what I am getting. I just wish he had stated that the 2020 book contained stuff from earlier books. And if this new one continues that tradition, he should come out and state that, too. I can't be the only one who knows about these old books, and owns them. It is hard to avoid these books at church rummage sales and fleamarkets.

I am keeping the earlier books, Bluenose Justice, Crime Wave, and Shades of Justice". At least one of them contains some pretty good research tips and named some Nova Scotia newspapers I had not heard of before, most of which are at the Archives for easy perusal.

Anyway, I will come across as a bitter person if I keep going down this path. I wish Dean Jobb nothing but success. And in ten years or so, he can re-package the books yet again and I will still be here noting the re-re-re-reprints.

We got home and watched the news and then Jeopardy! LeVar Burton had apparently got some constructive feedback after he taped his first episode recently. He decided to dial things back a bit, but it had mixed results. He still sounds overly excited when someone gets something right.

Off topic, I know, not that this blog has a particular topic, but I think Burton's behaviour about how much he wants the Jeopardy! gig to be unseemly. He has been everywhere open lobbying for the full time job. I do not consider him to be the best candidate, though. Several others I felt did a much better job. We'll see if his wife gave him more feedback after the second taping and whether his performance when the show is broadcast on Wednesday night.

We also watched a few episodes of "Schitt's Creek" tonight. We did not really watch the original broadcast. Just thought it was one of those unfunny cBC comedies, of which there is a multitude. But all the EMMY wins and the adulation made us decide to watch it from the beginning on Netflix. It remains a hard slog in places, but we have made it to season four.

The show is seldom laugh-out-loud funny but maybe it was never designed to be that way, which is fine. I was never designed to be a sports jock, a fact beaten into me when I was young and which I cheerfully acknowledge to anyone who will listen. That is all fine. The show has a sweetness to it. Some of the ancillary characters are fun to watch, especially the guy who plays Bob, the man who owns the garage that the patriarch used for a work space. Did you ever notice that he almost always half runs into a scene?

But here we are in season four, and we still don't get why the show is so revered. Does something happen in the second half of the show's run that will convince us that we are doing the right thing in investing all this time to watch this show?

It is now pushing one ayem. I think I will turn in. You all take care of yourselves and see you tomorrow.