Post 4058 - Halifax History That Will Interest You Not Even Slightly 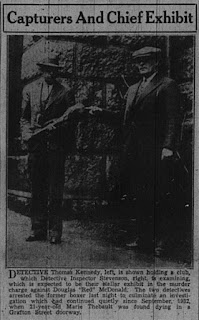 It shows a couple of Halifax police detectives back in the year 1933. They are holding a club they believed to be the one used to beat poor Marie Thibeault to death in 1932. The associated article leads one to believe that it was taken in front of the old Halifax city jail.

Last night, I wrote about how I had visited that old city jail, or what was left of it, back around 2010, when then-councillor Dawn Sloane took me there from a non-descript door on Barrington Street, one which you may have passed hundreds of times over the years without knowing what it was, or what lay behind it. Here is that blog post.

Here is the door we used to enter what I thought was the old city jail: 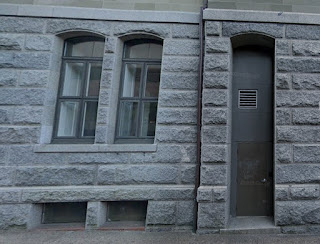 I mentioned that my friend Bruce MacNab had written a book about Harry Houdini's early years of honing his craft as an escapologist, and that he had spent some time touring in this part of the world. He actually did his first headline act in Dartmouth, in a building that has not existed in a long time. You really should read Bruce's book, called "The Metamorphosis: The Apprenticeship of Harry Houdini". It is meticulously researched in a way that I respect the hell out of.

Anyway, I mentioned last night, and Bruce read the post, that I had been in the city jail back in the day. He and I wrote each other back and forth earlier this evening. It turns out that I did not see the old cells at all. As he told me:

I blubbered that I remembered being in the cells. He pitied me.

"There is only one cell left and it is an equipment room. Don't feel bad. they showed the footings to Tom Selleck too. Gary Shutlak and I had a great laugh over this."

You may recall that Tom Selleck did several Jesse Stone movies here years ago. I seem to recall that he did an unrelated miniseries here as well. He spent quite a bit of time here in the 00's, and held a door open for me once when I was carrying something heavy.

At any rate, Bruce explained to me more about my misunderstanding/error as to what I saw in December of 2010.

"The sub basement is about 8-feet in height at Barrington but the floor rises to a mere crawl space at Argyle. On the Barrington side the footings are tall but the space between them isn't wide enough for a cell. Footings are generally twice the size of the walls they support above."

That does make sense, because the pictures of me in what I thought were jail cells were really in the footings, because if they were cells they were awfully narrow ones. Read the blog post I linked to above and you will see what I mean.

"For a time, they used the sub basement footing 'cells' to hold evidence and supplies. They were never used for prisoners. I was interviewed about this by allnovascotia in 2019 while they were renovating City Hall. The city's  architect claimed she had "discovered" the footprint of the old cell walls on the basement floor. I spent a day there in 2010 and had already explained to them where the cells actually were."

Suitably chastened, I asked Bruce about the picture of the two police detectives. Where was that taken? Once again, it was my strong impression that it was taken in front of the old city jail, which was in city hall along with the police department.

Bruce hunted around on google maps. He thinks, and I agree, that you will find it is here. 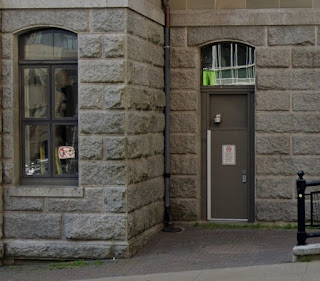 It is on Duke Street, very close to Barrington, just at the end of a black iron railing. Bruce tells me that the double doors just out of frame on the left, and even closer to Barrington Street, used to lead directly into the old police court/headquarters. 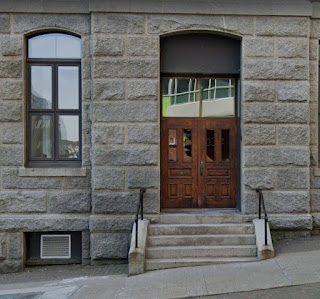 The man accused to killing Marie Thibeault was named Douglas "Red" MacDonald, a retired boxer. The trial took place at Supreme Court, which back then was on Spring Garden Road, where the main Halifax court is now. The county jailer brought MacDonald into court for his trial. That jailer was named Malcolm Mitchell, who was the father to Verdun Mitchell, a man I have written about at length regarding another famous Halifax unsolved murder.

MacDonald was found not guilty and disappeared from the public eye. I do not know what became of him.

So, there you have it. I think we have discovered where those two police detectives were standing back in 1933.

How many of you care about this stuff, other than Bruce and me? Uh, not many. But this is my blog and I will write about what pleases me, and that is that.

I have a busy day of researching on Friday, so I think I will turn in.