Sorry I haven't written the last few days. Busy, especially over the weekend.

Saturday morning, we drove to the Valley for the day. We started at the Wolfville Farmer's Market where I chatted with a local author named David A. Wimsett, who writes fantasy novels. Almost by way of apology, I told him of my experience in university reading the Lord of the Rings, and my utter disdain and dislike for it. He was a nice man, and I wish him well; but I cannot see myself liking what he writes. I'm sorry.

From Wolfville, we drove to Port Williams and the Barrelling Tide Distillery. I got a couple bottles of their excellent vodka, completing one of their frequent buyer's cards, which entitled us to a free shot glass. From there we went up the road to the Wood'n'Hive honey store, run by my friend Alex Crouse. I got some creamed honey, which is terrific stuff.

We went up and around Starr's Point and ended up at Prescott House, a provincial museum. It is free to attend a provincial museum through the end of August 31st, and we were late to take advantage. I repeated to Patricia what I had told her many times: that when I was growing up, I would jump on my bicycle and drive from our house to Prescott House in the summer and look at the museum and then complete the drive back home. Yes. By myself. Cue the violins.

We walked through the house. They had added a few new features since we had last been there, including some stuff related to the Prescott family during the first World War. I have been to Prescott House dozens of times over the decades, and always find something I had not noticed before.

Afterward, we strolled through the lovely gardens on the property, known as Acacia Grove. Sat on the bench and imagined what life would have been like for Charles Prescott back in the 1830's until his death in the late 1850's. Lolling about his estate, creating and popularizing all these varieties of apples that are still used today such as the Gravenstein.

We meandered our way over to Canning, where we went to the local meat market and grocery store. The world's smallest liquor store is in that grocery store in Canning; you should go there to see it if nothing else.

We decided to have dinner in Kentville at the King's Arms Pub, which as been there since the late 1980's, when I was still in university. I had a steak; Patricia had the fish taco's, which I wish I had ordered instead of the steak.

We returned to Canning to get more chicken wings, which were heavily discounted at the grocery store, before returning to Halifax. A very long day, we turned in relatively early.

Sunday, we decided to go to the Valley again, this time to Windsor, and Haliburton House. Thomas Chandler Haliburton, among many other writings, created the character of Sam Slick. It is apparently horrendously racist even by the times he lived in, but I must confess that any attempt I have made to read the Sam Slick "sketches" has been spectacularly unsuccessful. For modern readers, the writing is overwrought and boring. At the time, they probably sparkled, and peopled loved that stuff. And, too, the content of the Sam Slick sketches is thinly-veiled satire and commentary on the times he lived in, and the politics of the day. I defy anyone who is not a scholar of Nova Scotia politics of the mid 1800's to make much sense of the Sam Slick tales. But I digress.

The house, which is also part of the provincial museum complex since the early 1940's, is one I had never visited in my life, although I had long wanted to. What I did not know was that the hockey heritage museum had also moved into Haliburton House, occupying much of the wing that ol' T.C. had lived in back in the day. The house is fascinating, with nooks and crannies and full access to most rooms, with "do not touch" or "do not sit" signs liberally sprinkled throughout.

There are many Sam Slick framed cartoons, originally published in a Sam Slick compendium book after Haliburton's death, hanging on the walls.

But I want to talk about the hockey stuff, which is nearly unique for me, I know, given my apathy about sports.

I have "The Puck Stops Here", Garth Vaughn's book arguing that the game of hockey began in Windsor, Nova Scotia. Haliburton references the game of "hurley" played on local Long Pond, way back in the 1840's, which I guess is how they justified putting the hockey stuff in that house in recent years.  I was fascinated by one local hockey team, and its name, and its insignia. One hundred years ago, nobody would have batted an eyelash, or cared, that a team by this name existed, except those who followed the team's exploits with some degree of interest and anticipation.

I write, of course, of the Windsor Swastikas.

There is a little area in the hockey section devoted to the Swastikas, including pictures of the team and the trophy they won, and even an old team jersey which has seen far better days. I took some snaps: 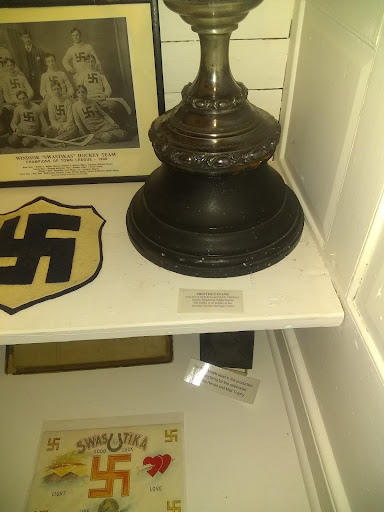 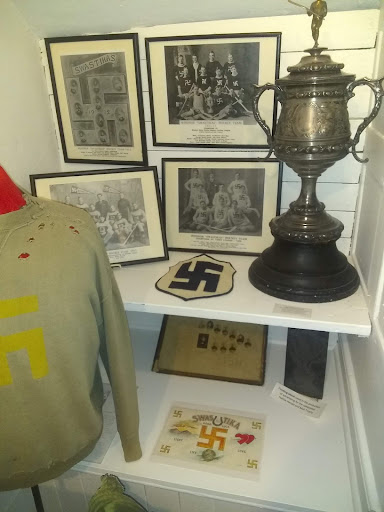 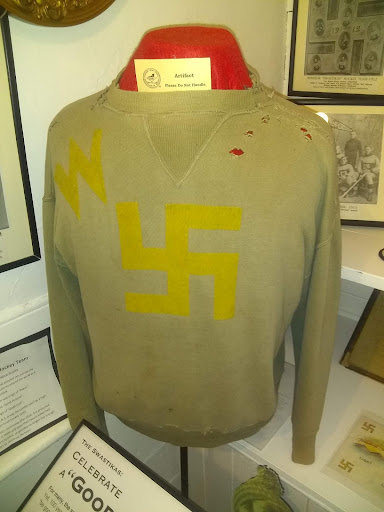 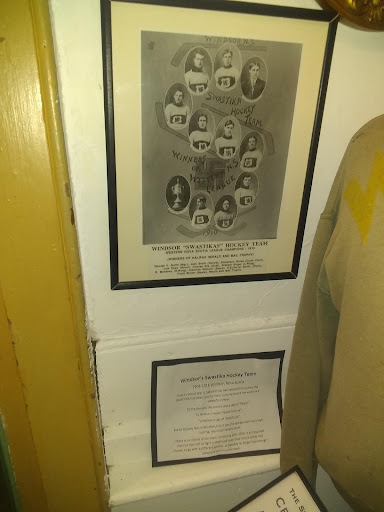 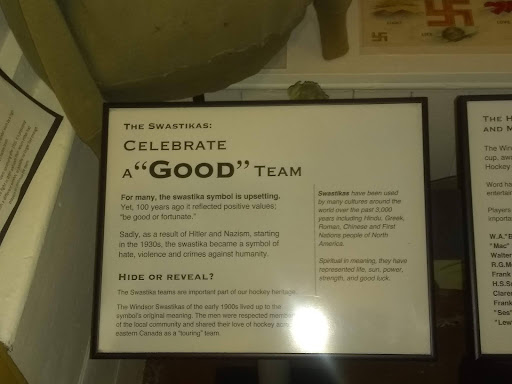 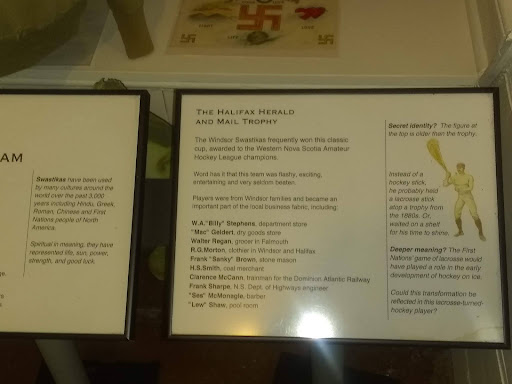 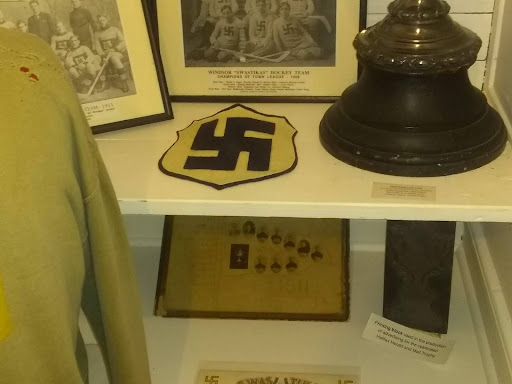 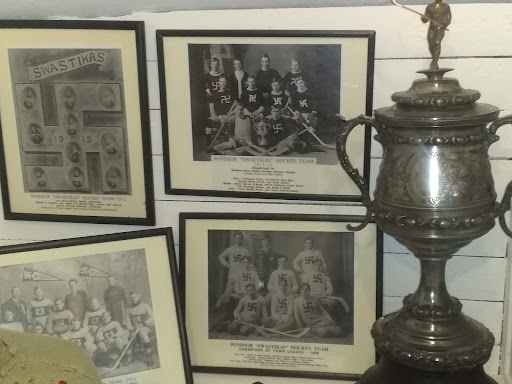 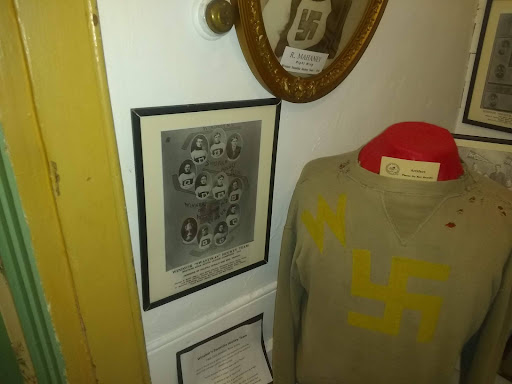 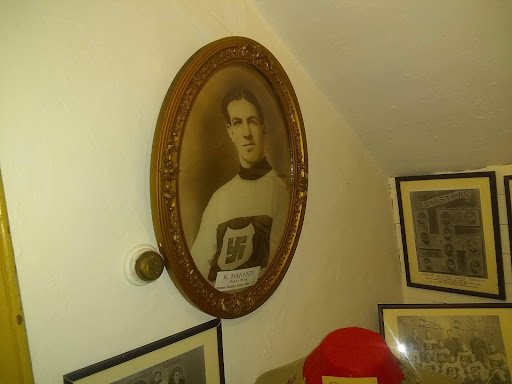 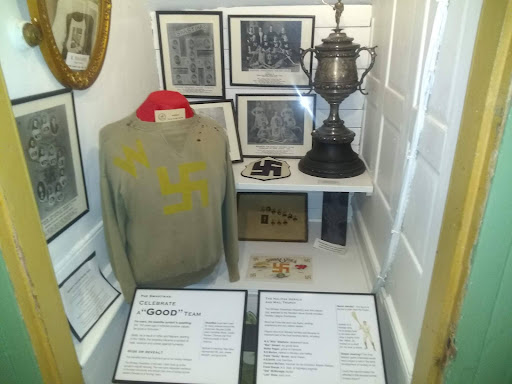 To see this stuff in 2021 it is disturbing, but once again, this team existed in the early 1900's, long before the swastika was forever corrupted by Hitler. The swastika was a very common and ancient symbol representing good luck, and there was nothing wrong at all with someone using that symbol, or deciding to name a hockey team after the symbol, or wearing it on a team jersey.

I respect the folks at the museum for putting up this display rather than hiding from its past and pretending that it never happened. It is what museums are for: providing proper context to the past.  Ditto for all the Sam Slick content as well. While the racist aspects of Haliburton were not denied and freely mentioned, it is all in proper context and shows the times the man lived in.

We returned home and turned in early. Monday, we stayed put and I am not sure what we did other than take things easy.

And now you are caught up.

I think I will go begin my day.

Talk to you tomorrow.