Saturday morning we went to the sell off of costumes and things from a locally-produced tv show called The Sinner. Season Four was shot here earlier this year, and there will not be a season five. Which is fine, because I don't think we made it through half of season one. But I digress.

Things were priced to sell, more or less. I did not want to pay 30 dollars for rubber boots, but I did see the following: 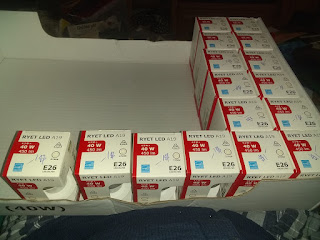 Yep. Sixteen led bulbs. The equivalent of 40 watts each, but only using about 4.3 watts of power. I got them for a total of $16, and they threw in the box.

There were originally 54 bulbs in the box, and there were quite a few when I first wandered over and took four of them. I soon returned and discovered that there were fewer still, so I took the other 12, for a total of 16. I paid the man, and chatted with him.

I don't know about you, but LED bulbs are not the be all and end all of the green economy. They cost quite a bit more to purchase. While they use far less energy than the old-fashioned incandescent bulbs, there is poor quality control on many brands of them. The store brand ones from Canadian Tire are horrid. Expensive, and burn out in short order. Been "burned" on them many times. Others are not "dimmable", so they're not suitable in those "eyes" that react to the sun going down and activate the light. Others still start off fine, but inexplicably stop working after a few months, long before their financial break even is achieved.

These ones are from Ikea. I do not know how good they are. The equivalent of 40 watts is not a good reading light, but suitable for an outdoor light or a hall way light or something. I do not need 16 of them unless they are all garbage and burn out by the holidays, in which case I will have wasted $16. After the money spent on the coffee maker and carafes today, I will have squandered far more than I should have.

Or, maybe, I will mail out a few as Christmas presents.