We had a good day.

We went to the Shore Club for the lobster dinner, arriving shortly after five pm. It was a nice experience. I am not sure why we waited so long to go. I guess I got it in my head that it was a ritzy place, too "fancy" for one such as myself. Perhaps that was the case when it opened in the 1930's, and remained a perception for several decades. But by now, it is a place where common folk with a little money in their pockets take their sweeties to dinner. And, if they want to, they hang around to attend the live music, assuming they pay a little extra. 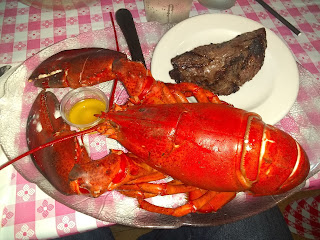 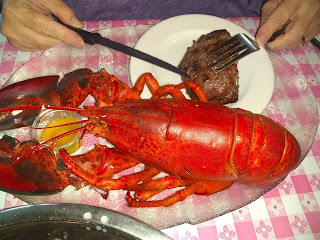 The first picture is my dinner. The second, Patricia's. We both got the large lobster with the small steak, the surf and turf. Started off with a pound of mussels and some salad and rolls. Ended with a couple of good desserts.

Say, I have been telling you about how much we like the new show on CBC, "Moonshine". They have been broadcasting season one, but they have been filming season two. Turns out that one of the stars just finished her scenes for season two on Thursday. She and her hubby celebrated by going out to dinner at the Shore Club, and sat at the table next to us. As her character, she spends a lot of time at the Shore Club, so it seems kismet somehow.

Her name is Emma Hunter, and she steals every scene she is in. And she agreed to pose for a couple of pictures with Patricia. Here they are: 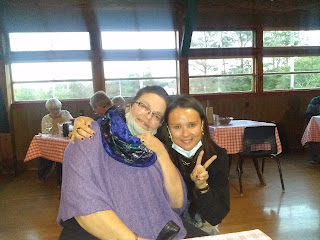 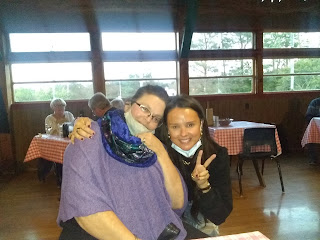 Emma has a significant imdb presence, so go ahead and read it for yourself.

She was really nice and funny and is a big part of the reason why the show is so good. And, when we mentioned the Goler joke that she told on a recent episode, she wondered how locals would accept it. We told her it was funny, but even after all these years, maybe still a little too soon. She did not have a clear understanding of the Goler story, so I told her the name of the book ("On South Mountain") and there is likely still a video about the trial on youtube.

And I just did a quick look. There are a few videos about the clan. This is the one I was referring to. The host is Claude Vickery, who was married to the assistant GM or whatever her job title was, at the company I went to work for after university. Claude cheated at the road rally one year, and I ended up missing some key parts of the trip until we could get caught up. Grr.

Anyway, Emma did not know the extent of the Goler history but appreciated that many of us took the joke in good humour. After all, it is a show about a bunch of lovable reprobates whose grasp of the politically correct is questionable to say the least. A Goler joke is the least of the things about the show that should be bothering those who make it their business to be offended by every little thing.

I told her about my part time job writing about cold cases and gave her a business card, because I will not rest until every person in the world has a Bevboy's Blog business card. She said she was interested in such cases and said she would look for my stuff. So, there is that.

We left around 6:45 or so and returned to Timberlea, where I picked up some meds at the drugstore and then came home. Newbie was meowing and wondering where we had been. Totally impatient cat, is he.

The weekend is here. We are not sure what we will do this weekend. Maybe a day trip. Maybe not. Not sure yet.

I think we will sleep on it and decide in the morning.