Post 4107 - What I Have Been Up To. How Has This Affected Me? The Path Forward

Hello there, my friends.

I have missed you.

I have been felled by something that I never knew I had. I have been told that what I came down with, had nothing to do with me. It was just my dumb luck, as two doctors told me in the last week or so.

The fact that it did not kill me, speaks to a bit of good luck, as well as Patricia's, um, advocacy for me.

Let me back up a bit.

I have suffered from horrifying headaches for most of my life. For most of those years, I figured that I would just have to deal with these headaches by staying home from work, or leaving work early, and laying down and sleeping and being as quiet as possible until the headache finally went away.

When I was 40, I mentioned this to my doctor. I figured that by that time someone might have invented an anti headache pill and that I could use it and save myself some sick days and these nauseating headaches. He put me on a pill which saved me plenty of sick days.

I began to take those pills whenever I felt a headache coming on. Over the years I have required the pills less and less frequently. I still kept fulfilling the subscription to make sure I had enough of those pills, especially since my doctor retired a year ago.

This fall, I began to suffer another type of headache during the fall. I would sleep for many, many hours. My head suffered severely. I would feel the jabbing pain behind my eyes. I had horrible dreams. I could barely wake up. I forgot how to do things that I had been doing for a long time. I could barely remember how to do things that I have been doing for a very long time. I have a computer downstairs that if I could remember its password, I would be pretty happy, but I cannot recall what it is. Stuff like that.

It took three trips to emergency. The second one, or maybe it was the third, in the week leading up to Christmas, I took the ambulance. A nearby neighbour, unknown to us, walked up to Patricia and offered her any assistance she wanted, ending up offering her a cherry pie. Patricia told me about this story, and I A) felt deeply touched that someone would take their time to give us a pie; and B) I began to tell that story to anyone who would listen, only I would say "a salmon pie" instead of "a cherry pie". I don't know why I mixed up those two phrases. I apparently repeated this tale to many of the people I met over the days I was at the hospital, along with other silly things which I do not recall.

The doctor who saw me the second night of the emergency visit prescribed an extra strength pill to combat what was believed to be the same kind of headaches I have suffered from my whole life. Back home. Back to bed. Back to sleeping and the suffering pain. Back to not eating or drinking.

The third time we went to the emergency clinic Patricia went with me. She told me to draw her a clock which showed a particular time. I drew what I believed to be this clock, but it was full of mistakes. I apparently threw the digits on the clock in the wrong order. I think. I do not remember. Patricia showed this drawing to the emergency doctor and asked him if that still looked like the output of a man whose headaches have reached this level, or could it mean something else? The doctor took a look at the drawing I had attempted and said he was ordering me a cat scan.

There is a research lab at Dalhousie University. They look for samples of people who have a brain tumour and my situation caused them some degree of excitement. My condition was communicated with them, and I got a visit from them. I had a brain tumour. A nasty, ugly brain tumour which had filled my brain with its ugliness, filled my brain to the point where the tumour was filling the area, which caused the pain fits, the exhaustion, and all the other things.

I was admitted to hospital on... Monday night/Tuesday morning, whatever it was. It would have been December 19/20. My brain was so messed up that I could not remember much of what was going on. I have been told that I was speaking in an inarticulate manner. I have conjured up strange memories from that week in the hospital. I have no idea which ones are real and which ones are not, so I will keep them to myself.

On Tuesday, they began to test on me and to see just what was causing the problems, and how badly they had become. I was put in to the section where they put other people who have had issues with their head: issues like mine, issues related to injury, or whatever else.

On... Wednesday morning, I think it was, I was sent off for my surgery. Hours later, I awoke in the recovery room, with my head partially shaven and the bald areas of my head stamped off by what sure felt like staples.

I was asked to complete various exercises, to finish stating what they asked me to, to mark on a page the next largest triangles and squares, to tell them which item was a comb and which one was a toothbrush. They kept asking me what day of the week it was. Trying to remember that was killing me. There were no calendars on the walls. I knew it was close to Christmas, but I did not know what day it was. I would often get those questions wrong. The woman in the next bed told me to calm down and that I could remember if I tried, if I could focus on what they were asking me.

Later on in the week, I was moved to a room which had other people in it, some kind of room that people who had gone through the process. I was given a washing basin and a tooth brush and changes of clothes I had to do on my own.

Christmas Day, I was told that I could go home that night if I wanted to. I did. I was able to wear the clothes I was wearing when I first got there, minus the shirt Patricia had taken home, so I wore another shirt and waited for Patricia to take me home. I ended up eating my Christmas dinner at the hospital. Patricia ate hers there as well.

That night we left the hospital and returned to the car and drove to the part of the South End where those two doctors show off their homes in holiday splendor. I stayed in the car and watched the people enjoying the properties. We made our way back home.

The last few weeks have been more and more about me getting better. I don't recall that stupid password on that computer downstairs. I now recall the nickname I had for Patricia for years and years. I can get words out of my throat again, even if certain words get stuck in my head. A hospital bed was delivered to the house a couple of weeks ago, which has been very helpful.

One good piece of news about this excursion is how much weight I have lost. The hospital gave me a certain amount of food for every meal, and I found I quite liked it. Patricia prepares enough food, balanced and so on, and it is all I can do to eat that. I eat barely 50% of what I did before I got sick. The pants I am wearing are hanging off of me. The shirts I had to wear outside of the shirts because I could not stuff them into my shirts because I was too heavy. I don't have that problem any more. It is a hard way to lose weight.

I began to see the physicians associated with the surgery last week. They gave me a rendition of what they had done for me and what has to be done. They opened me up and removed the tumour, but pieces of it have fallen into my regular brain and attached themselves to the good part of my brain. They only part that fixes this is chemotherapy followed by radiation therapy. I met with the chemotherapy doctor last week, and with the radiation doctor today. Also met with their nurses and assistants.

I will be having a CT scan picture taken soon. I will also be posing for a special mask which will keep my head in place so that the radiation ends up hitting the right shop. I will be getting specially stylized treatment. Due to my extreme youth and how I have been recovering from the initial surgery, I will be getting 15 days of this treatment, at a higher dose. The tumour will hate that.

I am going to fight like I have never fought before, in my life. I have already been through a lot, which resulted in the following hair look: 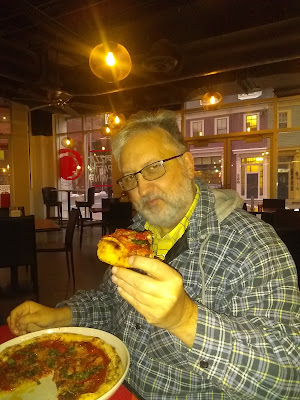 After today's good news, I decided to treat Patricia to a pizza place downtown. I could only eat three pieces before I could eat no more. A few months ago, I could have eaten the whole pizza as well as an appetizer. Today, half.

I have more meetings with speech therapy. I meet with Excel, which is about exercise for those who have had a go with cancer. In a couple of weeks I will begin the 15 days I need to defeat my cancer. Then, I go on a four week break before I start up again, with the chemotherapy. Then, I go on a periodic check to see if the tumour has returned. I may have to get myself checked for the rest of my life.

I will fight this like I have fought nothing else, and while the news today was sobering, I am not hearing anything that is stopping me. I am hearing things which I have to do to defeat my tumour, and that is what I am going to do.

I feel a little sorry for the brain tumour.